View source
watch 02:17
New Pokemon Games - The Loop
Do you like this video?
Play Sound

Not being hot anymore

La'Keisha is the owner of the business Lip Service.

La La, born La’Keisha Jones, just moved to Los Santos after serving 3.5 years in prison. She decided to move there to be closer to the on again, off again love of her life Angelo Luciano that she calls Gelo. On the train to Los Santos from New Jersey, she read Los Santos Business Weekly Magazine. From there decided to reinvent herself as a business woman and started her 10 step program of transformation.

La La grew up in Cherry Hill, New Jersey. She was the only child to two immigrants that came to the US from Port Royal, Jamaica. Her mother is a psychiatrist and her father a plastic surgeon.  They spoiled La La and gave her everything she wanted though it was never enough. La La wanted to be able to do hoodrat things with her friends while finding love in trap houses. She attended private school her whole life until she got kicked out in 8th grade for making a burn book. She then attended public schools where she made many besties. After her sophomore year in college, she dropped out to become a full time sugar baby. She had a roster of men that would keep her in designer threads but she still would always turn back to Gelo in hopes that they would live happily ever after.

La La is a bit of an airhead, often giving speeches that are “fake deep”. Even though she only uses a small portion of her brain, she is a natural born finesser, and saleswoman.  It was what she was born to do.  On occasion, she will have brilliant ideas and obsess over them until she grows bored and reinvents herself.

La La has a running list of besties that she would not only do anything for, but try to manipulate so they can do things for her too. 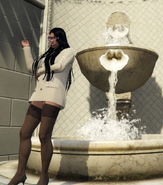