In a relationship with Alex Casterman

Former Interim Mayor
Kiki Chanel is the owner of KOC (Kiki's Organic Clothing), a self-proclaimed fashionista. She is role-played by MiltonTPike1.

She enjoys long walks on the beach and star gazing in the night, just kidding! Kiki is known for causing havoc everywhere she goes.

She enjoys hijacking cars, and running from the police in them. She is known for her violent outbursts and very detailed sexual innuendos towards any male she sees. If anybody insults her in any way she makes sure to snap back with a quick and violent drag, although sometimes they could become very long and detailed, sending the other person into an "I shouldn't have done this" moment.

One of the things she loves to do is impersonate Brenda Pancake, but Kiki referred to her as Breadna. Every time they saw each other it's always a situation to step back from, due to the violent screaming they both do towards one other.

Kiki Chanel went into Witness Protection under the name Jessica Glittersnatch, due to Bovice. Everyone thought Kiki was dead because of a prerecorded message system (prerecorded voicemail) on her phone.

As of December 8, 2020 she handed in her resignation as Interim Mayor of Los Santos to Judge Holden

Deputized by the Rolan Peebody Los Santos School of Fashion, Design and Costume Ethics, it is her duty as a sworn fashion officer of the state to intercede when she sees crimes against fashion taking place.

"You have the right to remain stylish, anything you wear can and will be used against you in the court of fashion. You have the right to an attorney, without one immediately available your trial will proceed and you will be forced to compile your own defense. With these rights in mind are you willing to talk to me about the charges against you?"
― Deputy Officer Kiki's arrest chant

In her fake cop outfit she would pretend arrest Stanley “Stan” Wheeler who had promised her a date along with Jimmy Bending on Mar 27th, 2019.

On February 12th 2020, Kiki was made interim mayor after Eugene Zuckerberg was dismissed of his mayoral duties. This lead to a big gathering at the courthouse steps where Kiki announced her plans going forward as Interim Mayor of Los Santos. 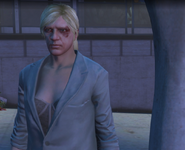 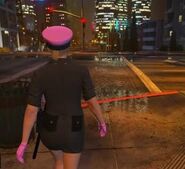