Kian Mercer is a character role-played by Ntviiper.

Kian Mercer is a tall, dark-skinned male who often gets mistaken for Juan Carlos Hernandez as they look nearly identical cause of their similar haircut and skin-color. He is often called "FlipB" or "notFlippy".

Membership in the HOA

Initially was a bartender for the HOA after Siz Fulker hired him on the spot after he randomly walked into the Mirror Park Tavern with Dante Thomas. He climbed up the ranks of the Tavern by hosting events and selling plenty of alcohol out of the place. He was promoted to Team Leader, then manager, then CFO, and now COO and CEO. When he is not at the Tavern, he is up at the Andi Jones Farmers Market and Dean World running the booths.

On April 24th, 2021 he was made a full-member of the HOA under the blessing of Siz Fulker due to his exemplary work at the Tavern (with the hope that he would also also help reinvigorate the then stagnate HOA).

After being burnt out from running the Tavern, he asked Siz if he could be more hands-on with the criminal-side of the HOA. He acts as a methamphetamines cook or lookout and when the HOA receive their shipment of guns and thermite he asked to help push them. Though, he got burnt out of the criminal lifestyle after getting screwed over numerous times by the police and other gangs so he took a step back and focused on a more civilian lifestyle for now.

Kian went through two facial reconstruction surgery after he was mistaken for a Chang Gang member (which got him shot down in front of the HOA Warehouse, causing a raid). His first surgery made him look like a mixture of Curtis Swoleroid and Juan Carlos Hernandez, his second surgery (which was orchestrated by Chang Gang and John Miller) made him into a completely different person. After changing his beard style, a few HOA members called him a mixture of Flippy and Randy Bullet. 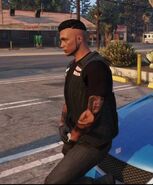 Kian in his new HOA kutte 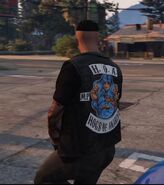