Pink
Khloe Brooks was a character role-played by Kari.

The NoPixel Community would like to thank Khloe Brooks and Kari for her service to the Emergency Medical Services on NoPixel. Her leadership and wisdom through the past years from when she came as a Trainee to when she became Co-Chief was invaluable and will be missed. She has impacted many people who have gone through EMS and for that she is greatly appreciated. Khloe Brooks will be very missed for her trademark giggle and for the stories she has gone through while in the city. We look forward for the next time Khloe returns to visit!.

Khloe Brooks is a former Co-Chief of the Emergency Medical Services, stepping down and resigning on 6th August 2020.

She was certified in Critical Care, Water Rescue, Life Flight and the Los Santos Fire Department.

Khloe is very nice to everyone, and in addition, a big flirt. She is also known for her pink hair, optimism, borks, and trademark giggle.

On July 22nd, 1992, a beautiful baby girl was born in Toronto, Canada. Amelia, which is Khloe's birth name, always had the desire to help people, and that desire only strengthened when she was involved in a serious car accident as a child. While waiting for help to arrive, she had to care for her grandparents who had sustained very serious injuries. It was a traumatic experience, but it was her first look into Paramedics and what they do. It was that moment that inspired her to become a paramedic. During her first year of high school, Amelia met a man named Kessler and the two became inseparable. Shortly after high school, they married. It wasn't long into the marriage when Amelia slowly began distancing herself from her friends and family. Eventually it was only her and Kessler. Years later, after enduring both physical and mental abuse, Amelia summoned all her courage and fled. She packed up her life and moved, not telling anyone where she was or where she planned to go. Amelia even went as far as changing her name.

Assuming the identity of Khloe Brooks, she moved to Los Santos and started a new life. She has met many new people and was able to become the person she always wanted to be. Optimistic, kind, but not afraid to speak her mind. She has become quite adored around the city of Los Santos. Finally, having the courage to file for divorce after several months in Los Santos, Kessler showed up and personally delivered the signed papers. Though small in action, this allowed her to cut ties with the past and move on to a new life. Even though she no longer needed to hide, she has opted to keep the name Khloe and continues helping the city of Los Santos. 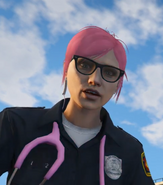