Shot by John Mineo after an extended pursuit with Chase Clouter

Kevin Whipaloo was a character role-played by sodapoppin.

Kevin Whipaloo managed the Burger Shot & Marlowe Vineyard, he was also a Floor Manager at Diamond Casino and Resort.

Kevin Whipaloo made the decision to move to Los Santos earlier on in his life as he was being bullied in his old town and felt that his reputation was so far down the gutter that there was no hope of saving it. Therefore, the best option for him was to move to a different city.

Within the first hour of Kevin's arrival to Los Santos, he made the mistake of yellow-booking Arush Patel "Speedy" Santana (a fledgling Vagos member at the time) as a tour guide, and unknowingly coerced into slinging crack cocaine, and wearing Vagos colors in The Families' territory. A shootout between Speedy and two Families gangsters ensued. Speedy was injured, and Kevin was then kidnapped, robbed, and abandoned on the beach by the Families members.

Kevin immediately called the police and snitched after the ordeal.

After his misadventures in Los Santos, he fell into a deep depression which culminated in him paying a crack whore to have sex with him. He accidentally knocked her up and she gave birth to a boy, whom they named Kevin Whipaloo Jr.

Shortly after this incident, Kevin Whipaloo left his infant son and went off into the sunset to find another place where he could make an honest living. After the financial crash, Kevin Whipaloo Jr was recruited by Dean Watson to manage the Burger Shot, which later become somewhat of a kingpin after making so much money off Burger Shot and allegedly selling off human meat in their burgers, he even has the police in his payroll which Kevin refers to as a "sponsor" making the police prefer not to arrest him because he is the main donator of their budget. Kevin also owns/manages the Marlowe Vineyard. After seeing how well Kevin manages Burger Shot, Dean recruited Kevin to become the floor manager of Diamond Casino and Resort.

On September 10th 2021, Kevin met Chase Clouter, who gave Kevin a new outlook on life. He taught Kevin that cops are "cringe," how fun it is to run crowds of people over, and the phrase "It's all love." Along with Chase, Kevin robbed several stores, took several people hostage, ran over countless people, while calling the perusing cops "cringe" throughout. They were chased by police down to the southern docks where their vehicle crashed as the police opened fire on it. Clouter exited the vehicle and returned fire. When Kevin exited the vehicle with a gun in hand he was shot by Ranger John Mineo and died shortly after. Kevin's final words were "It's all love."

Kevin's body was later stolen from the morgue by Mel Rickenbacker who, along with Burt Beans, Fingle Dan, Dingle Fan, Oki Doki and Scruffy Doodle ground it up and turned it into burgers. The group then fed the burgers to various people around the city, including Mineo. 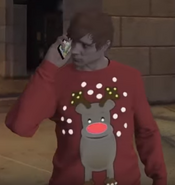 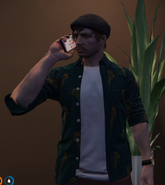