Kevin Shaw is a character role-played by CurvyElephant.

Kevin Shaw is a Senior Attorney for the Department of Justice.

He has been absent from the city for a long period of time, spending the majority of his time gambling in Las Vegas.

Kevin Shaw is 30 years old, 5'10" and 160 lbs. He wears his hair up in a faux mohawk, has a low cut stubble and a light goatee, and is often seen wearing black glasses. His attire usually consists of button-up shirts that reach his wrists or roll up to his elbows, paired with dress pants, dress shoes, and a belt (on the rare occasion he will wear suspenders instead). He also favors grey suits with patterned ties, usually donning a pink, white, or dark grey button-up underneath.

When leaning into his goofier side, Kevin will dress with no shame or consideration for his image. Examples being:

Originally beginning as a straight-edged lawyer with principles and morals to uphold; Kevin evolved into a skillful, manipulative liar who is willing to bend the truth to his favor in order to protect his clients.

Early on, Kevin was willing to turn a blind eye to illegal/weird activities in order to represent people who do questionable things but didn't wish to partake in crimes or commit them himself. This was, of course, with the exception of his tendency to speed and drive like an asshole.

As time moved forward and he began representing more powerful/dangerous clients, alongside associating with a terrorist organization known as The Gnomes, Kevin grew more familiar with aiding in illegal actions; such as informing his clients of incoming police or providing 'hypothetical' advice on succeeding in crimes.

Even if he may not realize it himself, Kevin is a highly skilled manipulator, and quite two-faced. Even during his worst depressive slump, Kevin is able to use his own emotions as a vantage point in a case defending a client, lying through a face full of tears in order to appeal to his opponent's pathos.

Nora Dupres was one to call Kevin out on his two-faced nature, stating that he was like the friends her father kept—men who cared only about maintaining their image of professionalism and civility, but underneath the facade, are vicious and do not care about anyone but themselves.

(Afterwards, Curvy said that Nora was spot on about his character.)

Even when he isn't on the clock, Kevin holds himself up with sturdy self-confidence and isn't afraid to tease his friends or dish out deeply personal insults to his debaters. He is stubborn, prideful, and does not take lightly to having his name wrongfully tarnished, such as being accused of being a liar in a public news report on Weazel News by James Tinklebottom, or being insulted on his work ethic. When Kevin is determined to prove a point, he goes the extra mile just to come out on top and make the other side realize their idiocy.

A downside to Kevin's cockiness is his inability to see his own weaknesses, so much so that he denies most negative emotions and offers of therapy or emotional support, even in the case of his depressive breakdown. Alongside this, Kevin, despite how much he may deny it, is addicted to gambling- namely, rolling dice. He often will insert an offer to roll dice for money into any conversation, even at inappropriate times. He has made the majority of his money through gambling, since he is an expert at manipulating his opponents, and has summed up above $500k total in winnings. What he claims as a hobby is both an addiction and coping mechanism, as this is what he immediately turns to in his lowest points.

One of his other favorite hobbies is driving like an asshole [1], and drifting through the city streets of Los Santos at highly dangerous (even deadly) speeds. He owns many cars of different types, most of them painted a dark metallic blue.

He also has a very good-humored side, which is evident in his willingness to dress up in embarrassing costumes with no shame, grow questionable mustaches just in order to anger the police force, and partake in goofy activities like impromptu dancing or strip teasing for an audience of ladies.

Olivia Copper summarized Kevin's personality up in one sentence (to which he agreed with):

"Kevin is both equal parts prude and a massive slut."

Kevin Shaw was born in Massachusetts, and pole-danced his way through Law school - with the goal of being a criminal defense attorney. Not much else is known about Kevin's life before he moved to Los Santos.

Kevin Shaw is now a senior attorney, and is considered to be one of the best defense lawyers in the city of Los Santos, alongside Murphy Braun.

The gambling and blackjack scene has died down considerably since he left to Las Vegas.

During the trial, Kevin focused mostly on the lack of evidence, that the one witness was also the alleged victim, and the unlikelihood that Winters remembered all the events that transpired after suffering brain trauma from being underwater for over five minutes. Kevin realized he just needed some ounce of proof to win the case. Thus, he orchestrated major perjury during the case with Sun Moon and Eugene Zuckerberg. He asked that they lie in court about being with Kindle during the time of Winter's attempted murder.

Ryan was found not guilty.

The next major case was Ronald "Red" Juggler, who was held until trial for drug trafficking. Kevin was there during CID's raid on Red, where they found hundreds of pistols in the trunks of his cars. However, Kevin forcefully reminded them that the raid warrant was only for drugs, not guns, which quickly angered CID and the police. Because of this, lawyers are no longer allowed to be present during raids.

During the trial, Kevin focused on inconsistencies in time. Red was downed and his car was left unattended for around fifteen minutes, where the PD eventually arrived and got him medical help and later searched his car, finding hundreds of grams of marijuana. Kevin pointed out how anyone could have easily planted the contraband in Red's unattended and expensive car before the police arrived. Furthermore, he pointed out the inconsistent and faltering statements the police reported--one officer in which claimed he drove from the PD to Red's car in the span of five minutes--something that was very improbable. Basically, the burden of proof was on the police and they did not have enough evidence to convict Red beyond a shadow of a doubt.

Kevin was thrown into the Chang Gang investigation situation, and shortly after signed a contract with Fast Lane Imports. This contract made it so he couldn't represent the Chang Gang, causing a ton of conflict. The gang believed Kevin was a snake and was only working with them for Fast Lane and Negan Graham's benefit. This was partially true because Kevin knew he and Negan would benefit from Chang Gang losing Premium Deluxe Motorsports and mentioned none of this. This resulted in Chang Gang kidnapping Kevin and Nora Dupres. Nora was only there because Kevin selfishly asked her to be with him despite him knowing a gang was trying to kidnap him. He thought that with an extra body and witness, the gang would not be rash enough to kidnap him. Later, Mr. Chang asked Kevin for a ride and, with Nora Dupres still in the back seat, Mr. Chang held Kevin at gunpoint and demanded he drive to a remote location, where other members of the Chang Gang were waiting. Kevin was stubborn, and used a fair amount of lying in order to talk his way out of him and Nora being killed.

During negotiations terms of his and Nora's safety, he offered his own life in place of Nora's. They were both doused in gasoline, and threatened to be burnt alive. After promising not to snitch, Kevin tried his best to instruct Nora to keep what happened to them under extremely tight wraps. Directly after they were released, Kevin was called by Detective Joey Keys where Keys asked what happened to him and Nora. Kevin lied and told Keys that some of his friends were worried about his gambling problems and they had an intervention for him. Keys knew he was lying and, alongside Detective Darrel McCormik, continued to contact Kevin inquiring for information. Kevin continued to lie and dodge questions to the point that McCormik viewed him as an accomplice and began to threaten him. However, Nora contacted the police behind Kevin's back, and she held resentment towards him for all that had been done to her--even going on to later threaten Kevin saying something to the extent of: "With all the things I know about you, you're lucky to not be behind bars. You should be licking my heels for how much I know." Kevin eventually told Vinny Pistone that Nora had been missing and it meant that she probably snitched on them.

After this, the Chang Gang held their suspicions and weariness of Kevin Shaw; going as far as to consider him for a hit list. They were ambivalent about adding Kevin, however, as multiple people spoke up for him. Most notably of these people was Yung Dab, who said he told Kevin a ton of incriminating shit and he never snitched. He went on to explain that Kevin held a stash for him and even aided him in certain situations. Most importantly, Dab said "come on, not Kevin"--he liked Kevin--and pointed out that Kevin only really cared about two things: his job, and gambling. Thus, Kevin was not added to the list.

Jacob Harth was also a notable client of Kevin's. The two had met before Jacob's near-fatal shooting and subsequent court case, as Tim Lee and Jacob Harth approached Kevin about working alongside them on the Dark Web. Tim Lee recommended Shaw to Jacob on the basis that he was someone Tim Lee and his grandfather, Sun Moon, trusted. Jacob had already considered Shaw a person of interest and gladly set up a meeting between himself, the Koreans Mafia, and Kevin. Jacob wanted to provide online gambling on the Dark Web and upon meeting, discussed what role Kevin would have in funding and facilitating it. Tim Lee's casino was the base of operations for the online gambling and sports-betting on the Dark Web. Kevin worked on the project alongside Tim Lee until Jacob closed and re-released the Dark Web. Kevin still has access to the Dark Web today.

The two had a case against Scarlett Winters, regarding an incident that occurred two months prior to the court date. Winters had shot Jacob at the sight of a an active crime scene, despite him being across the street as an innocent bystander. Jacob was found not guilty and won upwards of $150,000 in a later civil case.

Following the life-sentencing of his favorite client, Yung Dab; Kevin fell into the deepest depression anyone in Los Santos has ever seen.

As of 8/24/2020, Matthew Payne foreclosed on two of Kevin's apartments and reported it to the police. Multiple illegal class two weapons inside the apartment were seized by the police impending further investigation and action. Yung Dab's old stash house/sex dungeon was one of the two apartments foreclosed on. 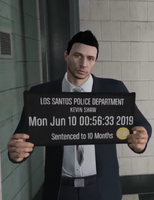 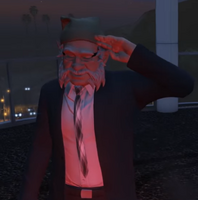 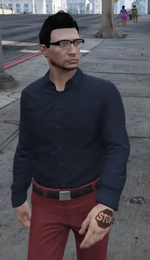 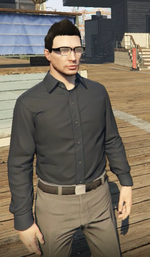 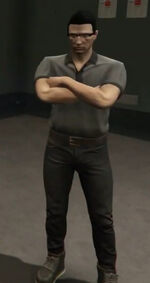 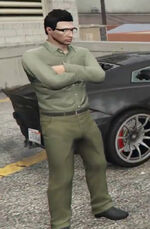 Retrieved from "https://nopixel.fandom.com/wiki/Kevin_Shaw?oldid=74031"
Community content is available under CC-BY-SA unless otherwise noted.