Kerm Henson is a character role-played by Sidefxmayinclde.

Kerm is thirty-two years old. With a distinct voice that many would recognize as the voice of Kermit the Frog. He has dark green hair, swept to the side and up into a pompadour haircut. And tattoos that cover a majority of his arms. Many can recognize him by his bright green shoes, which he is well known for wearing. Kerm is quick to action and will dish out any form of response he deems necessary to the situation at hand. Kerm is either a really good buddy of yours or he is your mortal enemy.

Son of the late Jim Henson, Jim's creation of the famous "Kermit the frog" has gotten the best of him and he needed his work to be more "alive". When Kerm was born Jim made sure that he would mold him into the "Kermit" he always wanted. Kerm growing up never really knew who he was supposed to be. Forced to watch clips over and over of Kermit the frog and force to recreate his likeness or else! After Jim passed Kerm moved to the city to find out who HE truly is. This is his journey.

"The great big dick in the sky is going to come down and smash us all"! 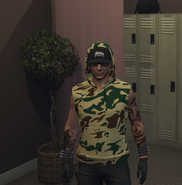 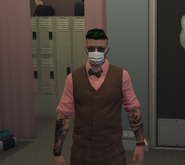