Kendra Davis is a character role-played by loveANG3L.

Kendra Davis is a tom-boyish girl from the Washington State and moved to Los Santos with her identical twin sister Hannah Davis. They were both born on January 3rd, 1995 and were orphans at the age of 9 months. They bounced around from orphanages and foster care a lot because they didn’t want to be separated and finally settled in a home, and they were able to stay together. However, the family that owned the home was very abusive and neglectful, so both sisters tried to get out of the house as much as possible to avoid their foster parents. This made it easy for Kendra to learn how to hustle on the streets to make money and to help take care of themselves.

She is envious of her sister for being so girly sometimes when she attracts all the guys with her sex appeal. This makes her spiteful and causes fights with each other along with how she spends her money on all the glam products and men she is attracted to. Kendra has been looking for a spot in a family since her and sister left their foster home years ago, she is hoping that moving to Los Santos will be the place. 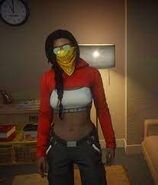