In a relationship with Charisma Star

Kelly Smith is a character roleplayed by rlly.

Kelly originally known for his thin body and cyclist gear is the founder of the Chain Gang bike gang.

Despite his best efforts Kelly was not always accepted as a serious criminal. He was often treated poorly by other criminals and civilians. After an altercation with Chang Gang in which Kelly was robbed he decided it was time for a change.

Tired of being ignored and abused, Kelly decided to enhance his scrawny body by taking enhancement supplements. Now Kelly has a larger than life body that commands respect. Now everyone takes notice of Kelly and no one will take advantage of him ever again. After his transformation he got in to the spotlight of Prune Gang. Eugene Zuckerberg decided to recruit him. Kelly now is has the rank of a Plum in Prune Gang. 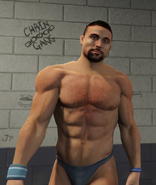 Add a photo to this gallery
Retrieved from "https://nopixel.fandom.com/wiki/Kelly_Smith?oldid=19496"
Community content is available under CC-BY-SA unless otherwise noted.
FandomShop Newsletter Join Fan Lab