Kayn Larp, better known as Yeager Demonblood, is a character played by vigors.

Kayn Larp is a member of The Guild and owner of the Guild Hall. He goes by the name of his D&D character, Yeager Demonblood, and stays in character most of the time. Yeager is a demon and level 16 Hexblade warlock.

He first moved to Los Santos under the name Rohlplae Escrinj. The government didn't approve of his name so it was later changed to Kayn Larp. Yeager hates being addressed by his legal name and usually pretends that Yeager Demonblood and Kayn Larp aren't the same person. Further, it also causes him great embarrassment to be seen without his horns or mask.

Personality-wise, he is straightforward, impulsive, and can come off as rude at first. Nonetheless, he is dedicated to his party members and the Rooster. His friends have described him as a "tsundere". According to himself, the things he cares about the most are his party members and, while he still owned it, his motorbike.

Yeager is driven by money and known to have multiple jobs at the same time, earning him the reputation of being a "wage slave". His obsession with making money often leads to him choosing work over adventuring. As a result, he has missed out on several quests and raids. However, Yeager's desire to make money clashes with his laziness. He always tries to find ways to do as little work as possible while making as much money as possible. Similar to his father, Lang Buddha, Yeager will brag about his material possessions and flaunt his wealth.

Ever since becoming a millionaire, Yeager has started claiming to have lots of sex and that women are extremely attracted to him and his wealth. These claims are contradictory to his seemingly limited knowledge of how sex and human bodies work. Depending on who he is talking to, he changes his narrative around to impress the other person. Sometimes he claims to "use a lot of condoms", other times he brags about not using any condoms, for example around Nino who disapproves of condom use. Occasionally, he even claims to be a virgin and states that sex is "cringe".

When Yeager was new to the city, he frequently got mistaken for a woman due to his style, color preferences, and masked face. Now that most people are familiar with him, this doesn't usually happen anymore. However, many people still assume that Yeager is a teenager based on his personality and voice when he is actually already 30 years old.

Several hints point towards Yeager being a former resident of Rust Vegas. He still remembers people from his past in Rust Vegas that have since moved to Los Santos as well, such as Crops Gus and Tulip Peach.

After moving to Los Santos, Yeager was initially one of the poorest Guild members. Being a reckless driver with a hard-to-control vehicle, he had to spend most of his money on fixing his car.

Around this time, he was hired at the Rooster's Rest. There, he made enough money to take out a loan for his first bike. After working as a regular employee for a while, he obtained a manager position and later rose to head manager which he still is today.

The Road To 1 Million

To pay off his loan, save up enough money for yet another bike, and pay off this loan as well, Yeager searched for additional ways to make money. He agreed to cook meth for Lang Buddha and began advertising his own item reservation service for the then-upcoming Word of Warcraft expansion The Burning Crusade Classic (commonly referred to as TBC). People were able to reserve in-game items in exchange for real money.

While working at the Rooster's Rest, he was also hired as a concierge at the casino. After pestering his employers about a manager position, he eventually became a wheel manager. This meant he was allowed to offer private sessions at the wheel of fortune where customers paid him $5,000 to get 10 minutes worth of undisturbed spins. This position later became obsolete when other casino employees started offering private sessions as well, and when the casino was fully automated.

Despite his grudge towards Burger Shot, he was eventually also hired as security there. During his time at the rival restaurant, he made it a point to never wear the Burger Shot uniform. He also occasionally stole food from trays before the customers were able to pick up their orders. After a couple of weeks, he was fired again by Shelly.

With three official jobs and several side hustles, he was able to save up $140,000 until his gambling addiction took over. In one day, he lost all of his savings at the blackjack table and had a meltdown. Despite the sudden jab to his bank account, he was quickly able to make the lost money back and continue accumulating more wealth.

In May 2021, Yeager became a millionaire and kept this status until the end of June. Being a millionaire further exaggerated his sense of self-importance and need to brag about his wealth.

On top of all other ventures, he started giving out private loans as well.

At the end of June, he became the owner of the Guild Hall and started the production of illegal suppressors that him and the other Guild members sell to criminals around the city. After investing around $400,000 into the comic store and several thousand dollars into materials to build suppressors, he was no longer a millionaire.

Yeager once again hit the one million dollar mark at the end of August after spending multiple days at the casino playing backjack.

Yeager's mask has helped him survive several bullets to the head. To be continued.

During the night when the aliens attacked, Yeager saw his friend 4T left with the aliens and went looking for her. He found the aliens and 4T attempting to execute Guy Jones. Yeager tried to save 4T from killing Guy Jones but was able to do so and were shot and downed by the aliens. The aliens then began to consume Yeager. Yeager, however, does not remember much afterwards, except the bite marks and missing flesh from his body, which Dr. Drake claimed to have foreign origin.

For several days, Yeager was suddenly missing in action. This caused distress among many of his friends and acquaintances. There are various rumors surrounding his sudden disappearance. Some say that he was grounded by his mom for using money from her credit card on Genshin Impact. Others say that he was having technical difficulties with his smartphone after running too many mobile games at once. Yeager himself has stated that he suffers from an illness that causes his body to overheat; medication is on the way.

Yeager is one of the seven Nerds chosen by the Stormlord. As such, Yeager and his friends have been tasked with various missions by the Stormlord to prepare them for Talon. These missions started out as harmless quests like collecting gems but gradually became more serious.

LSD from the Timelord

After completing the first set of tasks for the Stormlord, The Guild unlocked "alchemy", a code word for meth. This was the start of Yeager's descent into crime. Yeager and his party members were taken to a meth lab run by the Cleanbois and given the choice to become part of their meth operation as cooks. At first, Yeager was reluctant to join because he knew that meth production was a serious crime. Getting caught would likely result in him losing everything he had worked so hard for, including his bike. He was eventually swayed by the prospect of making even more money than he was already making.

In an attempt to desensitize the members of The Guild to violence and terrorist acts, Lang Buddha and confidants of Talon began taking them on missions to kidnap random delivery truck drivers. The missions required stabbing the drivers and leaving a mark of Talon on their bodies. Yeager himself stabbed a delivery driver for the Stormlord. Though he still prefers not to kill innocent people, he found that inflicting pain and death comes easier to him than he expected.

After the conflict between Meowfurryon, Denzel and Lang escalated, The Guild was asked to kill Meowfurryon. This was Yeager's initiation into Talon.

During its starting phase, Yeager and The Guild were given the task of setting up paintball matches in order to gauge interest in Lang Buddha's National Paintball Association. Whenever Lang wasn't present, he put Yeager in charge of moderating and coordinating the matches. Originally, Yeager's aim was to become an S tier player himself, though his team lost the first ranked match and several months would pass until his return to paintball. When the new paintball arena opened, Yeager played again in the first tournament at the new location.

With the opening of the Tuner Shop in September 2021, the car Yeager had been dreaming of for months was finally within reach: the Diablo GTR. All tuner cars sold at the Tuner Shop are limited edition vehicles that cannot be purchased anywhere else in Los Santos. Potential buyers can enter a list for the car they are interested in, but ultimately only a few people will be chosen. To make sure he would get the Diablo GTR, Yeager spent the first couple of days after the Tuner Shop's opening almost exclusively on the premises.

During the private opening event for investors and mechanics, he snuck in twice and was thrown out and banned from the shop until the public opening. Once his ban was lifted, he spent every waking hour pestering, bribing and threatening Eddie and other employees to make them sell him the Diablo GTR.

Eventually, he was granted the opportunity to test drive the car. During this test drive, Yeager acted very possessive of the car as if being the owner already. A group of other drivers damaged the car which Yeager hunted them down for. The fight escalated and Eddie banned Yeager from driving the Diablo again. During subsequent test drives, Yeager was only allowed to sit in the passenger seat.

Despite not being hired at the Tuner Shop, Yeager began claiming to work there, that Eddie was his assistant, and that he was the owner of the shop. After many more hours of loitering, Yeager was actually hired and became part of the Human Resources department together with Ramee. This meant collecting complaints, punishing bad behavior, and devising an elaborate strike system to keep employees in line.

Yeager's party members in The Guild often take advantage of his impulsive tendencies by teasing him. This includes poking his often exposed belly button, cracking jokes about his mom working at the Vanilla Unicorn, mocking his poor driving skills, randomly tackling him, or mishandling him while he's wheelchair-bound. In turn, Yeager can be very stubborn, brusque and dismissive of advice given to him. Despite all this, The Guild deeply care about Yeager's well-being. Whenever Yeager is missing or in danger, they try their best to help him. Yeager is loyal and protective over them and the Rooster's Rest when it really matters. 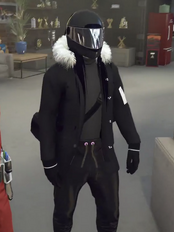 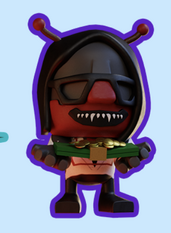 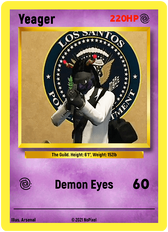 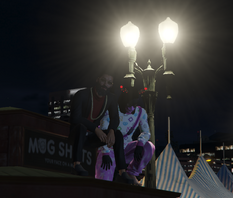 Yeager & Lang Buddha at the opening of Dean World 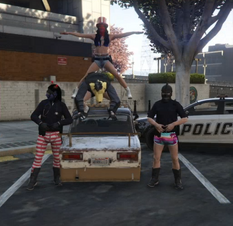 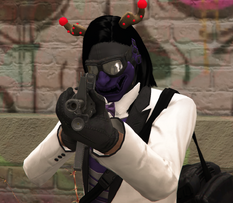 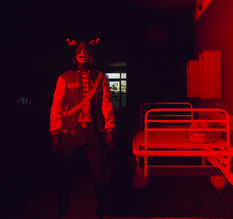 Yeager at the hospital during a blackout

Yeager with one of his suppressors