Kayden Dell'Anno was a former Senior Attorney, and previously partnered with DPG Law Firm; as well as Vinny Pistone's estranged and manic ex-wife. Currently married to both Jordan Steele and Irwin Dundee.

Kayden Dell'Anno was separated from her mother and siblings when her parents split as a child. She was raised by her father in a small community in Italy, after learning more of her past and his crimes growing up, she moved to Los Santos when she turned 18 to search for the family she no longer was allowed to contact. Kayden became a stripper and even ran her own club for a while before a bad breakup with an ex bestfriend caused her to move even deeper into the city and build another new life.

While married to Vinny, who at the time was the owner of Premium Deluxe Motorsport and a financial backer of Chang Gang, law enforcement began looking into Vinny because they suspected him of providing money to an organised gang. Kayden was labeled a snitch for being unknowingly listed as a witness on the court case filed against Vinny and the other members of the group by the Department of Justice.

Kayden has since spent a considerable amount of time and effort in trying to restore her name from the DOJ’s mistake, and prove herself as trustworthy. She becomes rather upset when people (despite her efforts) continue to bring up those past accusations about her, or snub her based on said misinformation.

She spent some time in Parsons Rehabilitation Center after the murder of her best friend, Nora Dupres, caused her to have a psychotic break. Kayden has mentioned that she suffers from both ADD and a personality disorder.

Since her time in Parsons, she has been on medication. And while her delusions surrounding the death of Nora seemed to have ceased, she generally is still a loose cannon when angered or pushed too far.

She currently spends most of her time towing, managing her parking lot and dealing with her dysfunctional family.

Kayden once faked her own kidnapping in order to get Jordan Steele to pay attention to her. She sent multiple threats of her own life over pay phones to Jordan Steele, and her best friend Nora Dupres. She contacted Jordan Steele to meet alone at a undisclosed location. Nora found out, along with Kai King, and they both got the police involved, even though "the kidnapper" told Jordan what would happen if they did.

After hours of searching and an excessive amount of threats, Kayden finally decided to send one last phone call to Jordan and Nora. She told them that "the kidnapper" would kill Kayden at the top of Mount Chiliad. Kayden stood at the top of the mountain, where she would finally stab herself, left to be found by Jordan Steele and Nora Dupres.

Nora and King arrived in a helicopter on Mount Chiliad, soon after Jordan arrived. Kayden was transported to the hospital via helicopter, where she laid on a hospital bed, saying only a few words about her attacker.

Currently, the only person to know about what she really did is Kiki Chanel. Who, Kayden has since helped orchestrate a similar situation between Kiki and her then boyfriend, Senior Officer Alex Casterman.

After her career as a lawyer suffered a significant blow from the snitch allegations, she assisted her husband, Jordan, in his job as a parking enforcer at Pillbox Medical Center. On the job she was often abused, stabbed, shot, or held at gunpoint for towing illegally parked cars. Arguing with and insulting the car owners also contributed to this, although often times she was wounded for just attempting to tow a car.

She once stated that she had been stabbed 70 times altogether while on the job and that she was now forced to eat through one of the stab holes in her body.

Kayden often felt unsupported and under appreciated by hospital staff when she was towing. Staff had grown tired of the commotion the towing would create outside the hospital and would show her little support, even sometimes siding with the car owners over her. The police would generally ignore her calls in favor of more high profile crimes or do little to hold the car owners accountable for assaulting her.

One night after numerous altercations between the owners of the illegally parked cars and hospital staff, Kayden got Kiki Chanel to block the emergency lane with multiple cars, to prove to them how much they needed her.

When that didn’t work, she stepped up the plan. She had Kiki disguise herself and stab her in front of staff to show them an example of the kind of abuse she was having to deal with daily. Ultimately nothing much came of the events, and not long after that Kayden quit her job towing for the hospital, much to her husband's disapproval.

Kayden did later return to towing, and now co-owns a parking lot with Jordan. Through numerous altercations she has also prompted the parking laws in Los Santos to be updated in the penal code. Providing more clarity to citizens and law enforcement.

After an experience towing with Chris Moes and his friends, Kayden often refers to herself as a south side gang, known as Tow Gang or Tow Gang Gang, and that her turf is 'these streets'. She often tows in gang territory and has managed to earn some level of respect with certain gangs.

After losing faith in the law system and quitting her towing job at the hospital, Kayden painted her face in ‘war paint’, dressed in combat clothing and declared she was ‘going to war’. She aided the Lost MC and helped Irwin Dundee recruit hang-arounds and possible prospects for the Bondi Boys MC.

While helping Dundee, she shared the story of her past with him and her desire to belong somewhere. Also, to his surprise, that her and Dundee would probably end up getting married one day.

Kayden later joined the BBMC as a prospect and became a blooded patched member. She worked closely with Dundee, Maxy Mersion, Michael Simone and fended off advances from Brocky Potage, Irwin Dundee’s half-brother.

When her troubles with people started affecting her ability to make deals for the BBMC and could potentially start unwanted conflicts for the group, Kayden disappeared and assumed another identity - Camila Biamonte.

She worked undercover to restore her name and then later returned to the BBMC, which had grown substantially since her disappearance. After a controversial vote within the club on whether or not she had betrayed them by disappearing, Dundee spared her life and revealed to her that he loved her. He gave her a number of ways in which she could return to the BBMC, one of them being to marry him. They married and Kayden's patched status was removed, making her an 'old lady’ instead.

The vote caused Kayden to lose trust in most of the newer members of the BBMC and she stated that while she would be there to support Dundee, she couldn't pretend to trust the others. Kayden distanced herself from the group, choosing to spend time with Dundee when he was alone or with group members who were either not present for the vote or joined after it occurred.

Some time later the BBMC went through a string of internal problems. Resulting in an unsuccessful coup d'état, in which ironically all of the BBMC members who voted against Kayden, left the group altogether. The BBMC is now significantly smaller, and while not something Kayden would ever blood into again, no longer uncomfortable for her to be a part of.

Jordan and Kayden are co-owners of Steele Family Parking & Impound Lot. The lot is located at Garage Q and is officially owned by the Steele's and acknowledged by The State. Chief Justice Dennis LaBarre issued a warning that any criminal activity will be met swiftly.

Despite this announcement by The State, citizens continually harass, ignore and attack Kayden and those working for her at the lot. So much so that Dennis LaBarre had to write a new charge, Leaving Without Paying, which carries a 15 month prison sentence and a $1125 dollar fine.

In protest of the lot, numerous citizens have taken to parking their cars at Garage T instead. Because of this, Kayden organised for Solomon Seerson, one of their lot attendants, to open and run Garage T and charge outlandish prices to make Garage Q's prices seem far more appealing.

To further the appeal of Garage Q/Steele Family Parking & Impound Lot, Kayden had their other employee, James 'Apples' Appeller, constantly kidnap, rob and otherwise terrorise the people parking at Garage T. While Solomon tweeted out informing people of the new dangers Garage T had started to attract.

Kayden is currently continuing to establish the business and organise the other services they plan to offer.

Kayden's criminal record prior to expungement.

Kayden in her Integrity apartment 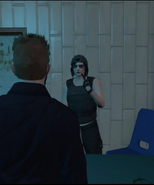 Casterman interrogates Kayden about the disappearance of Kiki

Waiting for Dundee to get out of prison

Kayden pretends to be Achmeda to expose Jordan's true feelings about Kayden being dead.

Catching up with Dundee

Retrieved from "https://nopixel.fandom.com/wiki/Kayden_Dell%27Anno?oldid=31691"
Community content is available under CC-BY-SA unless otherwise noted.