Brown
Kanye Mushkin is a character role-played by LeWolfy.

Kanye Mushkin is a chaos loving man who loves thrills derived from police chases, robbing stores, and of course, 💎SHINIES💎! He is soft spoken, with a voice that constantly breaks.

Kanye Mushkin is the oldest brother of the Mushkin family, at the age of 29 years old. He is incredibly loyal and protective towards his three sisters. When his younger sisters left to head to Los Santos from Vice City, Kanye followed to keep a watchful eye out for them, and help them in their criminal endeavours.

Growing up, the children were exposed to multiple kidnappings and murders, which eventually became the 'family business' and desensitized the Mushkin children to violent crime. Azeban Mushkin, the head of the Mushkin family, began this criminal empire on the back of his failing pharmacy business, which led him to kidnap people to sell their organs on the Black Market for money to support his kin.

Despite Kanye's competency in criminal activity, he had little interest in succeeding his father as head of of the family business. He focused more on standing by his younger siblings, protecting and guiding them, whilst being motivated by money and 'shiny' things.

The Mushkin Family Seal is a mischievous Raccoon, thus the siblings wear a Raccoon mask to represent the family. Whilst his sisters used to wear the mask when partaking in criminal activity, Kanye generally wears the mask the majority of the time.

Kanye has pleasant relations with everyone in the Mersion family, he particularly gets on with Mikey Mersion who he met when they first arrived in Los Santos. The Mersions and the Mushkins have been known to rob banks and the jewelry store together with a great success rate.

Whilst Mia Mersion prefers to create convoluted stories as to why she's in the bank, Kanye and the other Mersions prefer to take a more direct route by taking hostages with guns. Kanye met the Mersions via his guardian and mentor in the city, Irwin Dundee. They both sell weed together, and share newly discovered information about the criminal world.

Irwin Dundee recruited Kanye when he first joined the city to sell weed for him on Hawick Avenue. To test Kanye's loyalty Irwin took him to his apartment, sat him down, and showed him the many guns he obtained to scare him into submission; but had little effect. Kanye treats Irwin as a mentor and guardian; someone to go to when things get tough. In return, Irwin treats Kanye as a pusher, giving him increasingly larger cuts of the drugs he sells.

Kanye angered Irwin when he got into a shoot out with a "Green Gang" member regarding pushing weed on their territory, and then stole his vehicle to rob grocery stores. Kanye has had little contact with Irwin since.

When Kanye, Mikey Mersion and Mia Mersion were selling weed on Hawick Avenue they were approached by Ryan Parker and Reid Dankleaf, who were also selling weed. Hostilities arose when Mia and Ryan started fighting; Kanye hit Ryan over the head with a hammer, knocking him out and stealing his possessions. Little did Kanye know that Reid was Irwin's boss, and led to a confrontation between all parties. The confrontation was settled when Ryan and Reid got 'payback' by knocking Kanye out.

Despite the rough start with Reid Dankleaf and his boyfriend, Ryan Parker, they have become relatively close friends. When robbing a Fleeca bank together, they were chased for 20 minutes by the police in an Oracle [1] car. Kanye escaped the police by hiding underneath the highway off-ramp. This bank robbery solidified their friendship, and Reid even exclaimed he would kiss Kanye for his driving skills.

Annabelle Higgins and Kanye met personally for the first time when he was trying to buy an advanced lockpick. After various adventures, from scrapping cars to robbing houses, they turned out to be close friends. Kanye refers to Annabelle as his girlfriend to other members of the Mushkin family.

The Mushkin family have a relatively distant relationship with the East Side Ballaz. Buying weed, crack, and guns from them forged a business relationship that would result in profit for the Mushkin siblings. Kanye has robbed a Fleeca Bank before with Damian Frost, a prominent Ballaz member, who he had a friendly relationship with before his death.

Kanye frequently gets captured by the police, and knows many of them on a first name basis. Licking the cops is an "M.O" by Kanye to show affection in his cheeky nature; licking them as he says, has "married" them. Kanye has notably licked Stephen McClane, Brittany Angel, and Emily Reinhart.

Kanye also feeds information to the Leanbois, like if anyone unwanted is on Lean Street or if there are cops patrolling the Southside, he will give them crucial information so they can change their plans if needed.

Kanye Mushkin developed a close-knit relationship with various members of the Leanbois, most notably Al Saab as he is an employee of Bad Boy Customs and a close friend of his. Kanye continuously sticks by Saab's side through thick and thin.

Curtis sells Kanye cocaine and other illegal items. Kanye has recently shown his loyalty to Leanbois'. Kanye shot at OTT after OTT attempted a drive-by on Curtis.[2] Kanye shot ADA Cameron Dupres on Curtis' order and helped him clean up what they thought was murder at the time due to Cameron having no breath. He has also been holding down the taco shop with the Leanbois.

Lang hired Kanye to work at the taco shop in the southside as security. Kanye must protect the workers, especially Fiona Stewart and Doug Canada.

Despite being an avid thief, Kanye owns a personal vehicle. 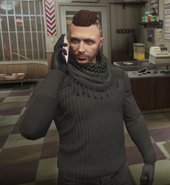 Retrieved from "https://nopixel.fandom.com/wiki/Kanye_Mushkin?oldid=45396"
Community content is available under CC-BY-SA unless otherwise noted.