Justin Bridges is a character role-played by Chanpu.

Justin was given the nickname of “Victor” by Claire Seducer the first time that they met, with that first meeting eventually leading to him becoming a member of the Angels.

Justin loves the finer things in life. Back home, he lives in a mansion and has many butlers and maids. He has built tennis courts with his own two hands. He moved to Los Santos in search for a purpose. Along his way, he borrowed 200k from a mysterious Mr. V and was desperate to make that money back or be hunted.

One of the first ways Justin made money was by selling materials to the Tuner Shop. Thats where he met Claire Seducer, who laughed at Justin mocking that he would never be able to make that money back in time.

After selling hundreds of materials to the Tuner Shop, Claire offered an "opportunity" to helps speed the process.

Justin became a "private oxycodone connect" AKA "Oxy Runner" for Claire. Claire threatened that if she finds out Justin is selling drugs to anyone else she would kill him herself.

Victor often prides himself on being "grass fed" meaning he takes no kind of drugs and alcohol. It has never really been known why he takes this stance on until one fateful day, when Claire found Metamorphine in the Angels warehouse and injected Victor with it. The drug sent Victor on trip, attacking his fellow Angels until he fell to the ground on the edge of death, after being saved by Claire the effects of the drugs continued. He suddenly adopted a british accent and began to talk of another world that had fallen. He spoke about how he'd be on that world for hundreds of years, watching kingdoms rise and fall, people die the unworldly beasts and that he had to go back. that his people needed him, but it was a path he needed to walk alone. He left with a promise and a message. A Promise that he will return. He did not know when but he would. and a message that when the time comes The Angels need to be ready, and with that he left. To save the kingdoms.

2 and a half hours later, he returned, but he was not the same. He was older, his hair had gone grey and his beard had grown bushy, he was a broken man, he had failed to save his people and the kingdoms, everyone he knew had died including his unnamed wife and children. He was happy to hear that in this realm not much time had passed, that they still had time to prepare for an impending threat of a force that can be known only as The Darkness, for saying it’s true name would only make it arrive sooner. Victor, Claire and Alex set out on a journey to find a way to defend and defeat the darkness when it arrives. It was a long journey but in the end all they found was death.

The next day, Victor is young again, unaware of the events of the day and years before. A remnant of the aged dark realm victor perhaps. The question remains, where is the dark realm Victor now? And when will the darkness arrive? 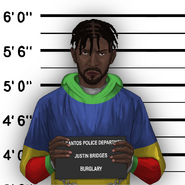