Jupiter Adams is a character role-played by Kennasofly.

Jupiter is known for her growing reputation as a street racer. Her racing style has been labeled as “sending it”. She drives with a high-risk, high-reward mentality. She often participates in crime and holds the role of the getaway driver.

Jupiter has a feisty, flirty personality. Although she may come across as shy at times, she will not hesitate to throw hands or shoot when crossed. She loves to make sexual innuendos and is very money oriented. Jupiter is extremely loyal to her mom, Nancy Landgraab and her sister, Carmella Corset, even forgiving Carmella for once attempting to murder her. She goes after anyone who disrespects them in front of her. When she is feeling a bit stressed, she smokes weed to help calm her down.

Jupiter is the youngest daughter of Nancy Landgraab. She was adopted as a baby and doesn't know who her biological parents are. It is unknown how Nancy came to find her.

Nancy Landgraab took Jupiter in and raised her as her own. Nancy taught her daughters, Hannah, Carmella and Jupiter, how to hustle and use their sexuality to their advantage. Nancy is proud of her girls and their power of persuasion when it comes to men.

Carmella is Jupiter's older sister and most trusted ally. They often confide in each other about relationships and team up for jobs- Carmella being the hacker and Jupiter being the driver. As sisters, Carmella is the person that knows Jupiter best and always has her back.

Hannah is Jupiter's oldest sister. When she was around the two of them weren't as close as Jupiter and Carmella but she still had her sister's back. Hannah was known for being a little protective and over the top. During the time when Al Saab and Nino Chavez were after the girls, Hannah tried to protect them but ended up causing more chaos.

Wingman is Jupiter’s ex-fiancé. He unfortunately fell victim to the family curse and was murdered not long after him and Jupiter broke up. Jupiter gained her nickname Wingwoman from the two often being seen side by side in matching outfits.

John Spartan and Jupiter started dating after she became a vampire. She was arrested during her turning ceremony held by Carmella, where the two planned a fake date in order sacrifice BBMC member, Chain. She was caught and interrogated by Spartan who tried to get her to bite him as well. When she was sent off, he gave her his number and the two began talking. Her criminal background and involvement in street racing led to him breaking up with her in a parking garage.

When Heath first met Jupiter, he just saw her as another one of Paris's friends, but after Jupiter started coming around more frequently, the two got to know each other more when she joined the Saboteurs.

Heath, while at the time he was acting "gay undercover", developed a small crush on Jupiter as they spent time together, however Jupiter didn't seem to share the same feelings for him. She always will think of him as "the gay bestie", even though he now denies being gay. This is where her iconic saying "Bitch, we know you like Boys" came from, and every male friend Heath's around or talks about, she jokingly asks if they are his new boyfriend. The two remain best friends, boosting cars for GNE and cleaning money with weed/oxy runs. Heath previously stayed at her house sleeping on her couch but has since moved out.

During the time when Heath faked his death she was the only close friend who didn't attend the Funeral because she felt in her heart he wasn't really dead and proceeded to searched Truth Island daily instead.

Lana is one of Jupiter’s day-one’s. They both took part in creating the group The Saboteurs which later disbanded. Jupiter, Lana, Carmella and Olivia Harvey, also worked as a crew in an attempt to complete the first all girl’s vault. Jupiter and Lana grew distant after Lana broke up with Heath Argo and joined the Mandem but are still friends.

Along with Oakley, Violet, Abby, and Claire, they attempted the VAR heist, a first for Jupiter.

Olivia and Jupiter have been friends for a while. Although she comes and goes from Los Santos, whenever Olivia is back in town the girls get the crew back together to complete jobs and catch her up on the latest Los Santos News.

Cayman and Jupiter became closer during the time when she thought she was pregnant, and he was going through relationships problems with Sam from NBC. Now he is someone she will call up regularly for advice or to be messy with.

While cleaning money and running oxy in GSF's territory, A couple members of GSF rolled up on Jupiter and robbed her of the money she'd made. Jupiter felt betrayed, seeing as she'd believed she had a friendship with OG members Dexx and Carter. Along with Ajax and her best friend Heath Argo, Jupiter robbed and shot GSF, then Ajax attempted to ocean dump them. Unfortunately they were saved and remembered the incident. They continued to go after Jupiter until she returned the items. The conflict was officially settled when Summer took Jupiter to the top of a mountain, stole her phone, and made her walk back top the city.

Paris and Jupiter used to be close friends and members of the same gang, The Saboteurs. That friendship became rocky after the Saboteurs split up and the girls began going their own ways. Jupiter felt as if Paris didn't value her friendship anymore and when Paris began building a new gang, The Dolls, She felt as if Jupiter didn't respect her efforts to build something on her own. They talked about their issues and agreed to move forward, but a couple days later Paris found out that her husband and Jupiter had been flirting. Paris cut Jupiter off completely. They haven't talked since.

Maverick is the ex-husband of Paris Argo. When Paris and Jupiter’s friendship began to fall apart, Jupiter started hanging out with Maverick. He eventually told Paris that he wanted a divorce and immediately began pursuing Jupiter. While talking to Heath, Jupiter revealed that Maverick cheated on Paris with her before their separation. Now, Jupiter and Maverick rarely speak.

Lexi Law and Jupiter have a complicated past. Lexi, Jupiter, and Carmella used to work at the Vanilla Unicorn and would often clash. While Lexi was dating Wolfgang Cole, she believed Jupiter was after him as well. Because of this, Lexi didn't trust Jupiter with her brother and made it known that she didn’t approve of their friendship.

Liam Law and Jupiter got to know each other when he became more involved in street racing. The two had a friends-with-benefits type of situation which started after his gang member, Violet, called Jupiter and let her know he was interested. Jupiter's history with his sister, Lexi Law, caused tension between the siblings and when she found out that he'd been sleeping with Jupiter, she shot him in the back.

The relationship came to an end when Jupiter and Carmella kidnapped Lexi for a Bay City Bank job. While preparing for the job, Carmella spotted Lexi at a clothing store and suggested they take her hostage. Once at the bank, the situation seemed cordial until The Angels found the bank they were at. Liam shot Jupitar in the head, then Lexi shot Carmella.

After the girls got medical attention, Claire suggested they meet up to sort everything out. Here, Carmella asked for the money back which The Angels denied. Carmella told them she will take it out of Violet and Oakley's paycheck at morph, as she is firing them. Lexi pulled out her gun and Carmella pointed out that they seem to like shooting instead of talking, sourcing the "Don't Fuck With ze Angels" incident where Carmella called Lexi "Bootleg Kim Possible" and got shot. Lexi then shot down Carmella and Jupiter, ending the conversation. 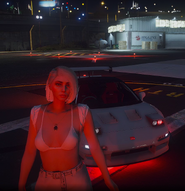 Jupiter with her NSX 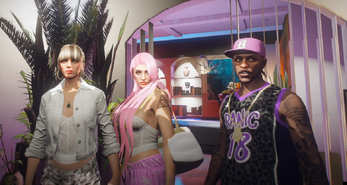 Jupiter with Lana and Mando 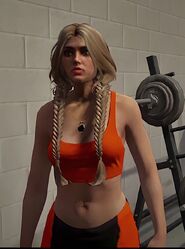 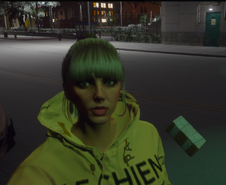 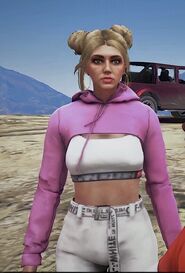 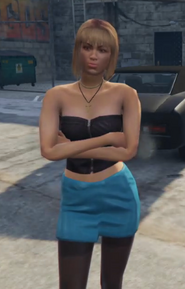 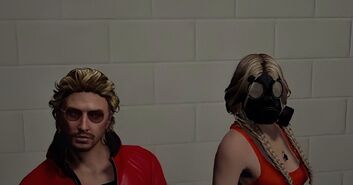 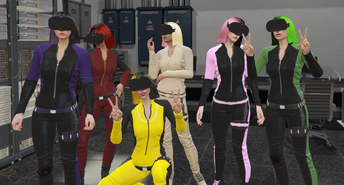 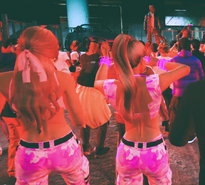 Carmella And Jupiter at Wuchella 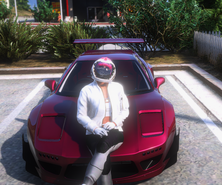