Judge Holden is a character role-played by MurphyBraun.

Judge Holden returned to Los Santos after a long absence. He was around more often in the earlier days of the new city. Holden will be reinstated by Chief Justice Dennis LaBarre and return to his former job.

Judge Holden presided over the divorce of Jordan Steele and Jean Steele. After days of deliberation, he granted the divorce and awarded Jean $5,000 per month in alimony. 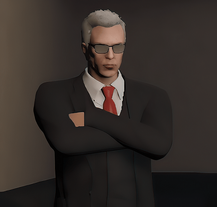