Murdered. Stabbed in the back and thrown out to sea.

Joshua Wade grew up in an orphanage in Los Santos where he met a girl named Victoria and his best friend Sally. He also found a young injured fox he later named FUG. The orphanage was later abandon with every child being left there. Sally took leadership and formed the Aristocats Club. Joshua was bullied and tormented. They killed his pet fox and Joshua doesn't recollected what happened but was found by the police with every child in the orphanage dead and him starving and malnourished.

Later in his life, he grew up perfectly fine, married Victoria and became a detective for LSPD. He claims he took a case to out the corrupted politician and he started to get ticks. After awhile, Victoria wanted a child and Joshua kidnapped a child for Victoria to take care for. Joshua was caught and sent to Carcer City at Darkwood Penitentiary. Where he had to take the persona or identity as FUG to cause under duress crimes of SNUFF films by Llyonal Starkweather. He was promised freedom and never got it.

He met Mr Smiley aka Kenneth Jesperson and Barry where he experience similar ultimatums. He formed the group Smileys in retaliation of broken promises to kill Llyonel Starkweather and get their freedom back. It was believed that FUG was killed but he wasn't dead just yet.

FUG showed up to Los Santos from a cruise ship he doesn't really remember being on. He was kicked off by the people and he walked around to find friends and family. He eventually ran into Kerm Hanson, who welcomed him to the city and showed him around the city and eventually have him stay at the Taco Shop where he met Iris Nivira and Pablo Madrid. Kerm introduced Iris as Victoria and FUG started to take a liking to the name since it reminded him of something. He would repeat the name Victoria in broken speech patterns.

He later ran into Mr. Smiley, a long lost friend and family from Carcer City. Mr. Smiley showed him the people he recruited to the Smileys in Los Santos. People he met was August Vakarian, Damien Sharp, Gemma Knight and Tobi Argent. Chasity Dawes eventually was introduced into FUG and showed some acceptance to his weird demeanor. He started to grow a liking to her.

FUG also occasionally sought out therapy from Pillbox therapy services. His main therapist/psychologist is Dr. William Thatch. FUG believes he can help him become better even if it's sacrificing his existence to make him and Joshua become better. During the times he has seen Thatch and other therapist he showed some concern in others being around in the city like Joshua, Victoria and Sally. He couldn't fully remember who they were and why they have been around. He is constantly looking for them to speak to them. He also recollected that Petunia is the name of his daughter and that he nicknamed her to bunny. They believe Petunia Brookshire is their daughter.

He also met people that he recruited to the Smileys like Keesha, Snowlady, Honey, and Betty. Joshua was awake in the city and he called Keesha to do a bone reading for him. During that bone reading, Keesha awoke FUG and explained what he is and why he is there with Joshua. FUG ran into Honey at the Taco Shop where he would later meet Betty, Honey's significant other.

FUG started to remember about the SNUFF films he had to do in Carcer City. He wanted to start his own artistic form of SNUFF films that he will eventually release in episodes. Chasity revealed that she needs help with her tarot card art project - Minor Arcana. FUG agreed he would help but maybe he can help in a way that he has been wanting to explore, SNUFF films. She was open to the idea and allowed him to film her project. The project came to an end and FUG decided to make his first episode and released it. It involved The Lady of the Lake and Chasity drowning a girl being sacrificed in Mirror Park Lake. He later to release more episodes and is continuing to edit them for TBA releases. You can see his episodes here on FUG's personal YouTube channel.

One day FUG decided to check out the Power Plant disturbance and was hoping to film people being shot or hurt for his SNUFF films collections and was unexpectedly greeted by Trooper Soze and Trooper Tones. They stopped him and questioned him why he was there and FUG told them he was doing some filming and after they asked for any footage he may have gotten, he left a link to his SNUFF film and drove off with glee. He lost them after a few moments of being in a chase in his hexer. Unfortunately later he was spotted again and taken into custody. He was then intensively interrogated by the Troopers and revealed that the people he was looking for was actually him. He was sent to Parson Rehabilitation Center to get medically evaluated where he spent some time with Mr. Smiley, Aubrey, and Honey Quickk. After awhile, Joshua Wade was released under the condition to leave his "face" to Thatch and to continue therapy sessions. He is also to continue to work with Bean Machine and paralegal work for David Watcher.

There has been some confrontation between Smileys and Alexandra Moroz where FUG and Mr. Smiley was shot down by Ms. Moroz. Chasity revealed she is dating Alexandra and was trying to help her kill Tobi, Chasity's son. FUG was getting overwhelmed and it revealed another identity named Nobody. Nobody then took Tobi and shot him at a beach. FUG has no memory of the situation and was confused to why Chasity was wanting to talk to him urgently. Chasity then abducted FUG and interrogated him where Victoria awoke and belittled Chasity's morality as a mother and was stabbed 20+ times and shot by Chasity. She left the Death Card on him. When FUG awoke, it was revealed that Tobi Argent was killed by Chasity and FUG stood by her side to comfort her.

FUG is currently working with David Watcher, Chasity Dawes and others to build something new and hopefully become something different.

-He is a direct direct pull from the videogame Manhunt, with many creative liberties taken, the original FUG can be found here: FUG gonna FUG you up! 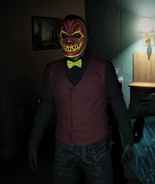