Jordan Lee was a character role-played by TurtleActually.

Jordan Lee was a Prospect for the Bondi Boys MC and their original head meth cook.

Malcolm Baker studied Criminal Justice in college with the aspiration of becoming a police officer. However, he couldn't due to his bad knee. Unable to get a job in his field, he became a truck driver for the local shipping port, working at the shipping yard for almost five years. Then his mother got sick with cancer, and had multiple open heart surgeries, wracking up medical bills. He knew that the Mob worked the port out of Philadelphia. So Malcolm contacted them and began to work with them, running their shipping containers in and out of the port; containing what he assumed to be drugs and guns. When his mother died about three years later, he no longer wanted to be in that line of work. It was no longer necessary since he didn't need the money to assist her. However, he knew the only way out of the Mob would be getting blooded out. Instead, he ran, heading west to Los Santos and legally changed his name to Jordan Lee, hoping for a new life.

Soon after entering the city, Jordan started forming friendships with various BBMC club members and hangarounds. Jordan quickly earned the trust of Collin McKinley. After saving Collin's life while out hunting, he began helping them out on jobs and joined as a hangaround under Chain's supervision. They formed a strong bond when BBMC Road Captain Barry Benson made Collin his jacket.

On August 21, 2021, Jordan and longtime friend Stevie McQueen were admitted together as BBMC Prospects. Barry cited his money-making skills and ability to get up good as reasons the club wanted him to climb higher in their ranks. Jordan became a trusted member of their drug operations. He proved to have a sharp business acumen and a tough streak that he hid well.

In his time as a prospect, alongside Olivia Garcia and Stevie McQueen, Jordan wanted to pursue the meth game, as it was something that the BBMC had not touched on. After a lot of time, and after Dundee tried the meth game himself, Jordan got the mentorship of Reggie Might, the leader of the meth game in Los Santos. With ease, Jordan grew to be a brilliant cook and a master at organisation and leadership. With his strain, 78-cat, the BBMC gained more money than they had in a long time.

After Reggie was blooded-out of the Vagos and slipped from his position at the top of the meth game, Jordan was ready to try and take that mantel as his own. As meth was completely overhauled in the city, Jordan spent countless hours trying to figure out his new formula, 42-oyster. The two new meth sell spots in Vespucci would ensure that the club could grow and thrive.

On June 19, 2022, Jordan was kidnapped by a lackey of the Dungeon Master, a serial killer. He left misleading clues taunting the BBMC about their missing club member as they searched the city frantically for him. Stevie eventually borrowed $90,000 from Nancy Drew in a valiant effort to pay the ransom. Sadly, although the club found him with a few minutes to spare before the deadline expired, Jordan had already been killed. His final words over the phone to Stevie were "Stevie, I'm in trouble. Do not trust the dice."

While Dundee was saying his final words to Jordan at the hospital later that night, a cop rudely interrupted him and spoke callously over their dead comrade's body. Enraged, Dundee shot him down, and in their grief the club began a shooting spree against the police force in his memory.

Jordan with his Sabre Turbo 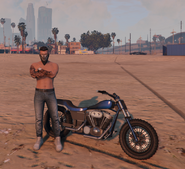 Jordan and his Cliffhanger

Jordan and his Gauntlet Classic

Jordan with Chain, Pez and Jesse

Selfie of all the jacketed Members at the time

With Collin and Chip outside of Pillbox

With Chip and Pez on bikes

Meeting of BBMC after a PD Wipe

Collin, TJ and Jordan in Prison 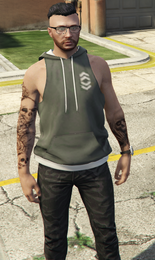 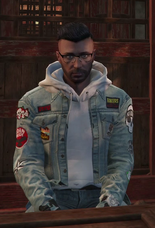 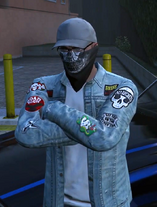 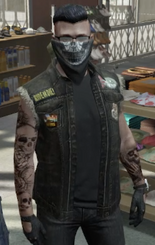 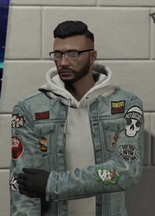 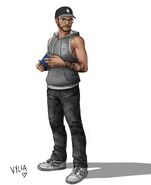 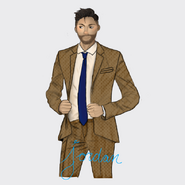 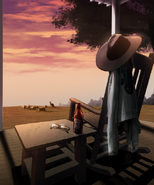 Home Among The Gum Trees by Risa 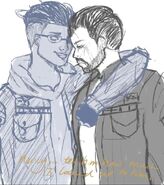 Nancy - Tell him how much I looked up to him by jealous.hollie 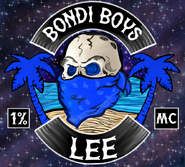 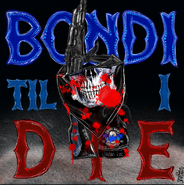 Jordan Lee- Bondi 'Til i Die by Smitten_Katze

Tribute to Jordan by SharaHeart6 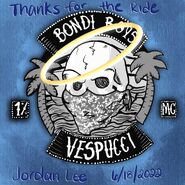 Tribute to Jordan by Nova_Aspyn_Arts 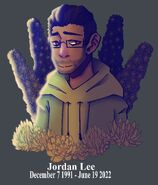 When I see you again -- Jordan Lee Tribute

O7 Jordan Lee, It's Been An Honor - BBMC
Community content is available under CC-BY-SA unless otherwise noted.
Advertisement