John Dorian is a character role-played by ELVIS_TheOG.

John Dorian was an Officer for the Los Santos Police Department, Badge #417.

He was previously a Deputy for the Blaine County Sheriff's Office, Badge #319.

He was previously the Undersheriff, under Sheriff Tribble.

John Dorian came to Los Santos in 2018 where he started his career as a medic with EMS. He quickly worked his way up through the ranks and most notably was the medic on duty during the Norman Bones execution where Chief Inspector Jackie Snow was stabbed in the neck by Norman Bones and Nina Vallieh was shot in the throat by Scarlett Winters.

At the launch of NoPixel 2.0, John Dorian transitioned from his career as a paramedic by going to med school, and working under the close supervision of Doctor Serge Cross during his residency. After Dorian completed his residency, he served the city as the primary trauma doctor during the EU hours at Pillbox Medical Center.

Six months later, Dorian sought out a making a transition to law enforcement when he applied to the police academy. Upon acceptance to the academy where he made it onto the cadet phase within the LPSD where he worked along side cadets Brittany Angel, Scarlett Winters, Lyonel Winchester, Conan Clarkson, Michael Dunning, and Colt Shepherd. FTO Michael Rodgers saw the potential in young cadet Dorian, took him under his wing, and convinced him of a transfer from LSPD to BCSO.

3 months after completing cadet phase, Dorian was promoted to the rank of Senior Deputy and given his FTO certification. 4 months later he was promoted to the rank of Sergeant at the recommendation of Police Chief Jackie Snow and Captain CID/Trooper Olivia Copper. When the big high command shake up occurred, Sheriff Travis Tribble asked Dorian to be his Undersheriff, and Dorian accepted. Tribble and Dorian ran the BCSO while Vladimir Raven and Olivia Copper ran the LSPD.

Momentous Dates Within the PD 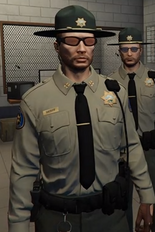