The Architect (Leader) ~ The Redacted

A Light in the Dark

Booth Babe (A Light in the Dark)

Please leave all edits of this page to the streamer. Thank you for your understanding! - TheeJRC

John Castiglia is a character role-played by TheeJRC. 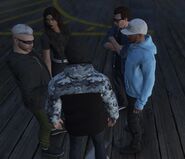 John was born in South Lanarkshire, Scotland as the oldest of 3 siblings. His family are wholly Scottish but are believed to have come from Sicily tens of centuries beforehand. For most of his childhood he had hoped to become a professional football (soccer) player until he was screwed over by a manager for his team, preventing him making it to a professional youth team by putting his own son in John's position as an attempt to gain his son entry to that professional youth team. He was comfortable growing up, not necessarily poor but certainly not remotely close to rich. Upon finishing secondary school, he went to college but was constantly under pressure and annoyed by many of his classmates. He couldn't hold down a job as a bartender despite multiple tries in multiple companies due to his lack of determination and his evident dislike for annoying customers. He realised that he'd have a better chance being a bouncer as it doesn't take as much brain power as memorising every drink, every price and every extra little task. His inability to hold down a job stressed him out to the extent he was more careless of maintaining one. Due to financial hardship, John decided it would be in his best interests to move to Los Santos as an attempt to make better money as he heard a lot about the gang/crime life. He had seen just how much money gangsters in Scotland were dropping in the bars he worked and wanted a part of that...just not at home.

John has shortish brown hair, trimmed on the back and sides and chocolate brown eyes. He is very pale skinned as a (at the very least) 4th generation Scotsman. Usually John can be seen wearing comfort clothes like hoodies/joggies or sleeved open shirts and an undershirt, with jeans and trainers. He also very much enjoys wearing suits as he believes he looks suave when he does. He usually carries a ninjalike hood (which he wears often) and he used to compliment it with a hatchet as part of his alter-ego "Hatchetman" as a means of joking with friends or protecting them when at the markets.

John is particularly introverted as evidenced by his first words to his first friends in the city (Sylvia "Sprout" Green & Arlen Menendez): "Do any of you need new friends?". He is unlikely to approach someone at the fishing spot to get a group and only got a proper job after much coaxing from Sprout. He has ADHD and struggles with controlling himself a lot of the time which people have a tendency to dislike as they pass him off as annoying. Despite this he really loves annoying Roddy Stone (a fellow member of The Redacted and is highly likely to go batshit whenever his friends are in trouble. He will drink heavily when he is stressed out or at any social event involving alcohol, opting to go for 50+ Whiskys nearly every time.

On the 20th of February 2022, John Castiglia enlisted Pact Nicely to The Redacted after outlining his desire to move on to doing bigger crimes and believing that Pact was an integral part to the potential success of said crimes, thus beginning the new group. The Redacted grew in numbers the next day as John contacted six more people to potentially join, half of which agreed (Roddy Stone, Semlina Thaysa and Samuel Dennis). The other three who did not agree to join did not say no, only that at the moment they have other things to deal with or need to have a think about it. Since then only five more recruits have been accrued (Sophia McMoo, Sebastian Von Di'Quad, Joshua Norris, Ellie Nite & Gianna Rosato) with more seemingly on the horizon.

The Redacted aim to get money they believe they are owed due to the small amount of money that market folk got when working booths and were initially also set up to protect others at the market from would be kidnappers/thieves prior to the markets becoming no more.