Joel Garcia is a character role-played by Silent.

Joel Garcia is a Lieutenant for the Los Santos Police Department, Badge #407.

According to his interview, Joel grew up in California and looked up to his cousin Jose who joined the US Marines, who later returned after his deployment to join the police force. Admiring his cousin, though finding the idea of joining the Marines to be terrifying, he decided to work his way into joining the police force instead.

His mother's whereabouts are currently unknown. 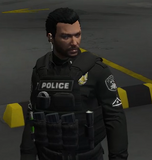 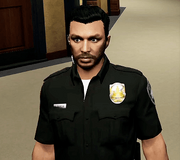