Jimmy Bending is a 27 year old ex-prostitute crack dealer. Aside from dealing drugs he has a record of various other crimes such as burglaries.

He was previously forced into prostitution by a pimp named Alabaster Slim, a man with a nice colorful jacket with hair that looks like spaghetti.

On Mar 27, 2019 while looking for new opportunities to earn some dough he encounters Stan Wheeler who takes a liking to him and he gives him a lift.

Through their journeys together they form a bond and he mentors the somewhat socially inept Stan to talk to women such as Emma Dupont, Kiki Chanel and introduces him to a life of crime.

Together without Stan realizing what they're doing at first, they perform burglaries and even some murders.

Exploring new venues he shows interest in a security guard job after a chance meeting and gets recruited into a security company named Merryweather Security on June 25th 2019.

They paid for the security clothing in exchange for them following their rules. Jimmy had other things in mind, figuring having a foot in the security company be a great cover for his drug smuggling.

Using his outfit he tagged along with a private investigator Jackie Levi and his assistant, someone dressed all in green referring to himself as Luigi. 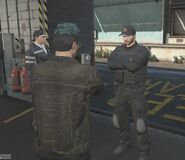 "Bro:ing it up" with Stan Wheeler

Robbed by Bird, Clown and Bear

Confronted by Kiki Chanel about assuming her gender pronouns
Add a photo to this gallery
Retrieved from "https://nopixel.fandom.com/wiki/Jimmy_Bending?oldid=11846"
Community content is available under CC-BY-SA unless otherwise noted.