Jerry Sweets is a character role-played by Lt_Custard.

Jerry Sweets is an Officer for the Los Santos Police Department, Badge #455.

He was formerly a Corrections Sergeant for the Department of Corrections, Badge #716.

Jerry has great ambitions to become an officer of Los Santos Police Department. Jerry requested ride-alongs and opportunities to apply over the course of several months. There he received a personal recommendation from Trooper Jack Ripley. Sweets then attempted to apply at MRPD only to learn that the department was not hiring at the time. Jerry was still determined to become an officer of the law. It was during this time that Jerry learned of the Department of Corrections hiring. Jerry applied and was hired on December 2nd, 2021. Two days later, Jerry began his first day of training at Bolingbroke Penitentiary as a cadet (#869).

Jerry became acquainted with many of the lifers in prison as well as his fellow DOC officers. Sweets asked many questions but was determined to learn everything. After only two days on the force, Jerry was promoted to solo cadet (#716) by demonstrating great proficiency in DOC operations. Jerry warmed up to his DOC family and liked chatting with the inmates at Bolingbroke. Sweets found comfort patrolling the grounds and the quiet life–enough for him to forget about his aspirations to become an officer at LSPD. After proving to be a worthy member of the force, Jerry Sweets was promoted and became a full corrections officer.

Jerry rapidly rose through the ranks of the Department of Corrections. He obtained the Riot Certification quickly after being promoted to Corrections Officer, and began training for his Rubber Slug Shotgun Certification on December 23rd, 2021.

It was during this time that Jerry received his first reprimanding from high command after accidentally bringing a lethal weapon into General Population and losing possession of it to Elizabeth Byrne after being knocked out by Irwin Dundee. Despite this, Jerry's training for Shotgun Certification was authorized by Connor Stubble.

He completed the program quickly and was promoted to Head of the Certification. Jerry became FTO certified on the same day as his promotion to the Head of the Rubber Slug Shotgun Certification, and later became AFT Certified. AFT, or Advanced Firearm Training, was the predecessor to the Bolingbroke Response Unit (BRU), a unique unit of the DOC that specializes in SWAT tactics for situations that occur at Bolingbroke Penitentiary.

Jerry was then promoted to Corporal after DOC High Command cited his marksmanship, and joined the BRU later in January, 2022. He then was promoted to Sergeant, in early February, before applying to the Paleto Bay Sheriff's Office on the 16th of March, 2022.

One day, after reporting on duty, Jerry is informed of an information leak regarding an off-limits section of Bolingbroke Penitentiary. When Jerry was a cadet, he was informed that the door was forbidden for anyone to enter. The sector once served as Maximum Security but was converted to a large storage and vault of valuables. Sweets is informed of the security risk the sector poses and is ordered to keep an eye out and suggest security routines to protect the penitentiary.

Jerry and his fellow cadets during training 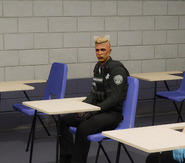 Jerry sporting cat ears while in the classroom