Jay Que (pronounced JK) is a character role-played by KristoferYee.

Jay Que is "from the streets" but a bit of a bitch. He's a lot of talk but not really any bite. He talks like he's ready to fight at any given moment but the second shit gets real he is unable to do much or fails to execute on what he says he'll do.

Since talking is all he can really do, he's actually pretty good at things that don't require action, such as rapping. He loves to rap about all the things he says he'll do or does (but actually doesn't do them).

Although he first tried approaching the city with open arms and a big heart, Los Santos has shown him it can be a place where friends are a rare thing; as a consequence there are few people in his life that he loves enough to put before himself.

Jay Que wants to become the greatest rapper of all time. In order to do that, he needs experience life so he has content to rap about. He is a "free spirit" but is definitely afraid to do a lot of shit he needs to do to have those experiences.

One of his side goals is to break away from his bitch like nature. So by trying to be in uncomfortable situations, he feels he can become the man he wants to be.

He would also like to get a girlfriend and some life experience.

As Jay advanced in the criminal world, he has had many shifting heist related goals, such as hitting certain banks and hacking difficult security systems. He also has a focus on becoming a drug lord specializing in weed and meth.

After the renovations of the Alta Street Projects, a hole in the parking lot wall that was often used as escape routes was patched. Jay realized that this change actually hurt the police more than criminals as it blocked a route that the PD would usually use to intercept a popular jump. Jay repeatedly has made it his goal to have the hole be opened up again by abusing it.

Jay has suggested that he may retire after successfully completing the lower vault, expressing that the lower vault may be his final goal. Jay has stated that after hacking a lot of banks and using computers, technology is starting to grow on him, and that he may take some time in his apartment and become a technology youtuber/streamer.

As Jay progressed in the criminal world, he robbed many banks with various groups. Included below are only robberies that are considered notable for Jay or are a themed/special heist. To see some of noted banks, see the heist lists of Jean Paul, Raymond Romanov, Irwin Dundee, Mayumi Himura, and Yuno Sykk. Other individuals without comprehensive heist lists that are often on jobs or have done jobs include Fiona Stewart, Jesse Cree, Olivia Harvey, Majima, Oki Doki, Goofy, Gloryon, Trey Romano, Brandon Valentino, Betch/Egg, Karina Dawn, Wingman, Rat, AP, JJ and many others.

After many repetitive bank robberies and after gaining enough wealth and confidence to be content, Jay decided to change up his robberies by doing thematic heists. Testing the waters with the Mario Bros Heist, Jay recognized how it rejuvenated his desire to do heists and how enjoyable it was for all parties involved. Since then, Jay has ramped up the frequency of these heists, often basing the themes on popular video games and television shows.

After some time after the founding, the crew chose to go by The Phantom Thieves which has since evolved into The FEMLY, but sometimes go by or are called:

Jay, May, Oki, Goofy, Kitty, and K at the end of the camping episode

The crew's overall dynamic can best be summarized as a dysfunctional family, which each of the members recognizing this. Jay and May often argue as the two "parents" of the group, with Goofy often trying to be neutral or break them up as the "child." Despite this, they all care for each other significantly and give each other priority over everything else. Whenever they are in the city together, it is almost certain that they are in contact and either serious crime or SBS shenanigans are about to occur. There is no official leader and they treat each other as equals.

The criminal side of the crew is primarily a part of Los Santos' bank busting, car boosting, drug trafficking, and illegal street racing scenes. In bank heists, the typical roles involve Goofy as the driver, May as the negotiator/comms, and Jay as the hacker. The each are very experienced in their respective roles, each one playing a critical role at one point or another. In boosting, Goofy or May usually drives the vehicle being boosted, Jay hacks, and Goofy or May does the pickup/interference. They all have been shown to be capable shooters and drivers, with each having outdrove the whole PD (Air-1, interceptors, and CVPIs) multiple times.

After the crew's first vault with the new upgraded security systems (third vault overall), Mayumi suggested the name Phantom Thieves, however, both Jay and Goofy expressed some reluctance for the name. When discussing whether to join the meth game, May suggested Pay Day. They still officially remain nameless, however, now consider themselves as all part of The FEMLY.

They were caught for the first time as a crew on their fourteenth heist with all members, a vault, after Goofy flipped the car on a turn offroad. Goofy, with the help of a lawyer, dodged charges and jail time by pretending to not have been involved. After this incident, the crew collectively decided to consider to do other escape tactics other than just driving, such as bikes, squeezes, and swaps. On their next vault together, they had a backup plan of Jay's new Akuma stationed, however, Goofy ended up outdriving the PD due to favorable negotiation terms.

Throughout their criminal endeavors, the crew has run into individuals who have tried to harm, kidnap, or rob members of the crew. This has always been met with a swift response, with the crew leaving a warning if the individual has connections or shot otherwise. The crew does not ocean dump their victims so they remember their lesson.

Outside of heists, the crew often hangs out around the city. The crew has had a few notable all civilian days, most notably the beach episode and the camping episode. The group also occasionally plays videogames together in their apartments.

Since there are only three primary members, the fourth spot usually goes to whoever is around who is a part of the extended femly, such as Betch, Oki, or K if an additional is needed. Kitty Dream, despite her status as a civilian not engaged in crime, often hangs out with the group and is considered as a part of the extended femly by everyone. The criminal side of the crew developed over time, mainly through connections in the racing scene, with many prominent drivers becoming a part of The FEMLY

Before Jay pursued his passion in technology, he made sure to take care of his femly to the best that he could, handing over vehicles to May and Goofy, keeping the warehouse operational, and leaving behind over one million dollars in dirty money.

After Jay's departure, The Phantom Thieves declined in power and resources due to a myriad of reasons, including conflict with GSF, banks being unprofitable, less time together, and racing scene drama. When Jay came back, he sold off his Mustang 2015 to fund May and Goofy, criticizing the state of the warehouse and how the group had fallen. After this event and many members becoming more active, the group rebounded larger and stronger than before. Jay has taken a less grinder focused role, and has instead slipped into his place as the femly dad, taking care of all the "new grinders." Jay's focus recently has been on developing a femly business, Onifans, in addition to getting a femly house. 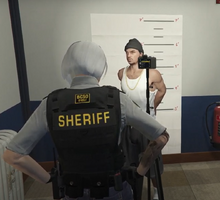 Jay, May, and Goofy vibing late at night

Jay's Lord of the Rings Heist

Jay using thermite on the vault

Jay and May confronting Goofy and Kitty about their relationship

End of Beach Episode: Sunset at the Yacht

End of Camping Episode: Sunrise on the mountain