Shot to death by Curtis and Speedy

The Families
James Carter was a character role-played by HeyOrbz

James Carter was a prominent member of The Families.

He was well respected with gangs and with people of the city. He was known for his intellect and business savvy.

In his early days in Los Santos, Carter often worked as a volunteer EMS. He met a lot of people in the city through it and didn't like to see the city have no one to help if people needed it.

He was also in a relationship with Jonelle Jones which ended after 5 months. James was also close friends with Outto-Tune Tyrone and Hilda Bulking.

After having mutual friends and being round the south side most of the time Carter eventually joined GSF. He became a familiar face around the city and used his connections well in his money making.

On Monday July 8th 2019, after a dispute between the Leanbois and Vagos against The Family in an ongoing war, James Carter was gunned down after a car chase by Curtis and Speedy by the Los Santos River. His body was placed in front of Pillbox Medical Center where he was found by members of the EMS and later confirmed dead by Dr. Kai King. 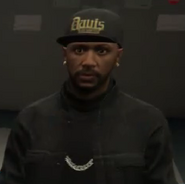