James Apeller, generally referred to as "Apples", is a naïve, self-described "two-bit criminal."

Childhood bullying has left Apples with low self-esteem, and in fact, often refers to himself as "scum." As a result, Apples shows blind, undying loyalty to those with strong, often criminal personalities who afford him a sliver of agency.

Apples also consoles the distressed, many times solemnly stating that "well, at least you're not scum like me." Apples has distinctive facial scars from being burned alive by GSF, and thus often wears a paper bag mask over his head.

Apples was approached by Ricky Robins of the Leanbois to act as a lookalike decoy during a pending court case. Apples later had his arms and legs removed by the Leanbois, turning him into a nugget, and, in the process he lost his memory. Apples was later given new prosthetic arms and replacement legs in an attempt to make him somewhat normal again.

Upon learning of his actions he was deemed a traitor and forcefully removed from the BBMC. Apples has trouble remembering what happened to him but he occasionally runs into Ricky and does tasks for him. Apples considers Ricky his friend.

Apples was recruited by Ricky Robins to join his criminal gang known as The Rickys. Apples sometimes identifies himself as Ricky. His nickname is also Soft R in the group. He is seen as second in command when Ricky is not in the city.

Apples works as a security guard and lot attendant for Jordan Steele's Steele Family Parking & Impound Lot at Garage Q. Apples helps keep the lot free of violence and crime, as well as taking parking fees from customers. Apples has been beaten up, kidnapped, stabbed, and shot while under the employ of the parking lot.

Following Jordan's lead, Apples and lot manager Wilhelmina Copperpot caused the fire bombing of the south side taco shop owned by the Leanbois. Afterward, Apples caught word that the south side gangsters were after Apples for revenge, so Apples faked his own death, taking the name "Zero."

In January 2020, Apples was recruited by Eugene Zuckerberg and Melbert Rickenbacker to join an expanded Prune Gang. The tenure was short-lived, as the expansion was later called off by Rickenbacker with all non-elderly Prune Gang memberships being revoked. Surprisingly, Apples didn't seem to be too bothered by this, continuing to do criminal jobs with fellow former Prune Gang members like Hans Snitzel and Davey Doherty.

In February 2020 Apples was hired by Ellie Dono to drive a taxi for Rooster Cab Co. Apples is not yet aware the company is a front for Lang Buddha's crime school.

While working "off the cock" for Rooster Cab Co. Apples helped Jordan Steele kidnap and rob his friend Sun Moon. Apples managed to escape a shootout that occurred during the robbery, but was later gunned down by Moon for his transgressions. Sun Moon works as a business advisor for Rooster Cab Co. and recognized Apples.

In March 2020 Apples was recruited by Luther Caine for the HOA (EU) in Caine's violent push to create an independent Mirror Park.

On July 17th, Apples and August were married by Eugene Zuckerberg at the Chumash Pier. The wedding was planned by Tessa Lamb and Bryce Miller was hired to pilot a jet for the after party. During the ceremony Kyle Rogain attempted to crash the wedding but was swiftly dealt with by Pepe Silvia and Denzel Williams.

After the ceremony Apples boarded a plane with August, Pepe and Nettie Machete, taking Bryce and several other passengers hostage for a Ricky plan where they ejected passengers out of the aircraft after making them bid for their lives. Unfortunately, Nettie panicked and crashed the plane during an emergency landing after it ran out of fuel.

The Death of Louis

On September 8th, 2020, after spending a week looking into the death of Ricky, August Vakarian was informed by Curtis Swoleroid and Eugene Zuckerberg that Denzel Williams executed Ricky Robins on behalf of the Leanbois. While trying to be amicable and understanding of Denzel's decision, August reached out to him and he drove her down to the Chumash Pier. August was then forced to relay the information of who told her the details of Ricky's death to Denzel. Minutes later, Apples and Louis Baton are called down to the pier by August, as requested by Denzel. Savannah "Cellar Ricky" Castillo overhears the conversation on the radio and starts to head down to Chumash Pier on a BMX Bike, reason why she arrived late to the situation. August, Apples, Louis, and Cellar Ricky were accepting to the fact that Denzel shot Ricky in the head to save him from suffering and torture he would later endure that night by the Leanbois. As Denzel starts to get anxious with conversation, he quickly snaps and executes August, Louis, and Cellar Ricky.

Apples is the last one to remain, and Denzel forces him to kneel over August's bleeding body.

Denzel sympathetically says to Apples, "Just know, you twos, [Apples and August] will be together in the next life. Whether it be hell, whether it be whatever the fuck it is, you two will be together. I'm so sorry. This is just, I guess, another thing added to my list of fuckin' regrets. I'm sorry Apples. I'm so fucking sorry, okay? I mean that. I don't say that often. I'm so fuckin sorry."

While Denzel is talking to Apples, Apples responds with a full understanding. Saying, "You don't have to regret this Denzel," as tears come to his eyes.

After the last "sorry" was said, Denzel fills Apples with bullets from his Draco and proceeds to leave Chumash Pier.

Denzel has a wife of his own, Deannedruh "Dee" Sweet, which causes him to relate to Apples' and August's relationship and connection between each other.

Louis unfortunately bled to death on the Chumash Pier. He was one of Apples' closest friends.

The Death of August

On November 16th, August Vakarian, (Apples' wife), was slashed in the throat and murdered by Ezekiel "Zero" Rogaine at Chumash Pier. Dying mere feet from where she married Apples and where Louis had passed away two months prior.

On November 19th, Officer Chet Manley assisted Apples in picking up August's body from the morgue. Apples then proceeded to take her to the Chumash Pier and drop her body in the ocean.

Following the death of August, Apples began to hear the voices of his the since deceased Louis and wife August. He would later begin talking to friends and other lot employees both former and current that were either deceased or had not been in the city for a while such as Pepe Silva, Chris Willis and Cameron Dupres.

Eventually Apples's mental instability was brought to the attention of the police following a string of petty crimes committed by Apples, and when it became apparent he was talking to people that weren't there Apples was admitted to Parsons by Judge Buck Stanton based on a recommendation put forward by Olivia Copper and Domenic Toretti.

On December the 4th, Apples was 51-50'd. Upon arriving at Parson's Apples sang blink-182's I Miss You to August after her requesting a song numerous times but being interrupted in the cells of Mission Row. After this song the voices ceased and Apples was left alone. While in Parsons the primary therapist Apples saw was William Thatch. Apples lied to his therapist in order to be released from Parsons earlier, and later commented to his co-worker Damon that he did not feel anything. This was Apple's third instance of being 51-50'd.

Apples was released from Parsons on the 11th of December. 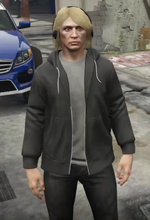 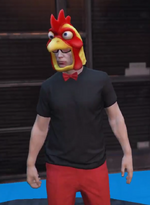 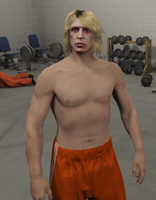 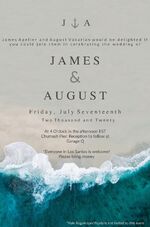 The wedding invitation supplied by Tessa for Apples and August's wedding. 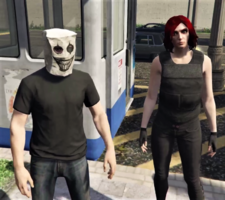 Apples and August at Garage Q. 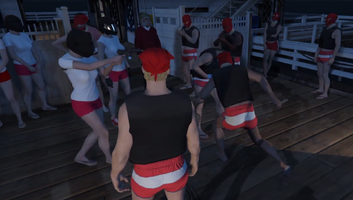 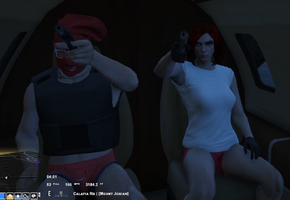 Apples and August hijacking a jet on their wedding day. 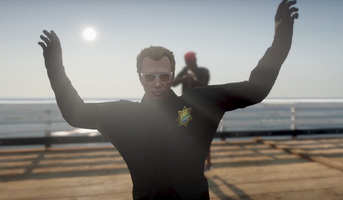 Apples having a draco pointed to his head by Denzel Williams after watching his wife and friends get executed before him. 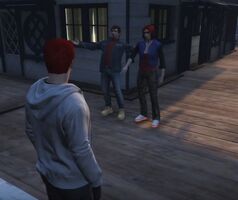 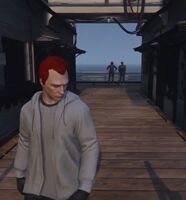 The ghosts of Louis and August as Apples leaves them behind.