Mechanic
Jaed Smith is a character role-played by LadyLynxx.

Jaed Smith is a mechanic who works for Harmony Repairs Garage. She was one of the founding members of Black Betty, Inc. along with Sonya Summers, Sean Tinker, and Daryl Dixon. However, Black Betty broke apart, leaving Jaed without a family, and a gang, for the time being. Currently, besides her day job at Harmony, Jaed is in the gun and drug business, still hoping to find a new family for the rest of her life. She is also a prospect of The Families.

Jaed Smith was born into a broken family, her Mom was a drug addict and had been taken away from her family at a very young age. Jaed doesn't know anything about her biological family. She had been in many foster homes where she never got a long with them which is why she kept on changing homes. Jaed was a very trouble youth, always got in trouble with the law and with school also. she never graduated school only made it up to grade 10. Later on in time when she was in her 20s she had met a Man of her dreams. He had change her life around where at the point she had dropped everything to be with him. She change her life around for him just to be with him because he was her first love. They both been together for 3 years and he started to change later in his years. He started to emotionally and mentally abuse her. Calling her all kid of names which had ruined her self-esteem. He got more worse where he started to hold her down, and punch her on the face. Jaed had enough of the abuse, so she broke it off with him. Her Ex then started to stalk her for months, following her to the point where she started to feel unsafe. The cops didn't want to do anything about it because there wasn't enough evidence to get a restraining order on him. So Jaed had no choice to run away from the Canada. Jaed is tying to look for a place that she can call home and in hopes to find a family/gang that she feels that she belongs with. She hopes that The Grove Street Families will provide just that. 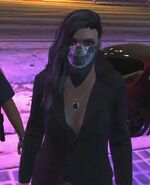 Jaed
Add a photo to this gallery

Retrieved from "https://nopixel.fandom.com/wiki/Jaed_Smith?oldid=76447"
Community content is available under CC-BY-SA unless otherwise noted.