Cat-Claw Avenue, near the Lighthouse.

Hatchet, to the back of head.

Previously in a relationship with Otto Delmar

Jaclyn "Jackie" Hyde was a character role-played by Kiwo.

Jackie was a typical "civilian" character. She held a routine job as an employee and manager down at Burger Shot. Her best friend was Cheryl Smith.

Jackie was romantically involved with Otto Delmar. Following an event of Jackie being held hostage by the Leanbois for a bank heist, Otto was made aware of what happened, and those responsible. Angered by the event, Otto made his way to the prison, and waited for the Leanbois to be released. Once their sentence was up, the Leanbois made their way from the prison. Otto opened gunfire, shooting them in the kneecaps.

After getting accidentally punched by Kevin Whipaloo and getting into a twitter war with him, Jackie decided to contact Weazel news and get an article made so as to get Kevin's nudes on the front page for all to see and slander his name. The article read:

"During the last week, Jaclyn Hyde was sending private and sensitive texts between herself and her lover Kevin. Unfortunately for Jaclyn, she accidentally sent sensitive pictures to another contact in her phone that is also labeled as Kevin. His full name is Kevin Whipaloo, and is definitely not Jaclyn’s lover. Kevin received these inappropriate and private pictures from Jaclyn on accident and instead of being a kindhearted gentleman and ignoring the pictures, Kevin decided to seek out Jaclyn directly. Kevin proceeded to punch her in the face and cause her great harm resulting in a trip to the hospital as well as mental trauma.

Not only has Kevin Whipaloo beaten an innocent girl, but also abused her and shamed her on the internet. Kevin Whipaloo clearly hates females and his only desire is to embarrass and harm females.

This violent response from Otto ultimately led to Jackie's death by the hands of the Leanbois. Jackie was followed, kidnapped, and her identification card was robbed from her. She was driven to the cliff sides by the Leanbois, and instructed to walk to the ledge. While attempting to speak in Otto's defense, she was struck from behind, and her body fell from the cliffside into the ocean. Neither her identification card or body have been found.

Due to a lack of concrete evidence, the Department of Justice dismissed the murder case. While Jackie is currently considered a "Missing Persons" case, many people have admitted that they do believe she is dead.

At night, a spectral vision of Jackie appears at the cliff side where she fell. Blood letters stain the rocks, spelling the name 'SAAB'. 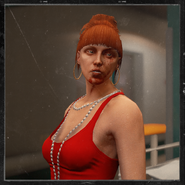 the photo sent to weazel news