The Church of Jesus Christ and Latter-Day Saints - Blood God

Lieutenant Brother of the LDS-BG Church

Jackson Cole is a character role-played by Buzterwow.

Jackson Cole is a 30 year old Iraq War veteran who's talents found him in many precarious situations. His attitude in life is to treat others with respect if the respect is first shown to him. Before joining the LDS Church he was a Free Lance Hunter, who starred on the Hit TV show "Man Slaughters Wild" where he gained a reputation for being one of the best hunters in the world. He is very fond of his friendship with Spencer Smith, the leader of LDS, and is the first to jump in to help if Spencer calls on him. Jackson was nicknamed "Jack MeHof" by Betch at Burger Shot and that's the origination of his later name "Brother MeHof." Jackson also has now accepted the role of "Lt. Brother" awarded to him by Elder Spencer for his constant persistence to spread the good word.

Jackson is very passionate about following in the footsteps of Elder Spencer, and takes every opportunity to be kind to others and spread the word. Although intelligence isn't Jackson's strong suit, in most situations he allows his muscles and combat prowess to fend off and defend those of the LDS. He's a very humble man always looking for ways to make the church money by any means necessary. He also uses his position to lead his brothers and sisters to jobs and rewards successful jobs with a group hug.

Jackson is also a very tender hearted man, never allowing himself to hold back his tears in moments where his brothers and sisters are around. He believes that by showing that his soul allows him to cry around others, means that he's truly on the path to bettering himself and those around him. Jackson's Right Hand Woman is Sister Ableton and after a few days of towing with her has grown very trusting of her. He has even told Sister Ableton that when the time is right he'd love to be at her and her fiancé's wedding, because he feels that with a great friend like her he'd love to see her shining on her big day. Jackson also has a close friend named Brother Flynn whom before joining the church they sat on a hilltop and shouted to the city," One day, this city will be our's!" He truly feels like joining the church has led him closer to obtaining that.

Jackson can also be described as very temperamental and also suffers from a mild case of PTSD. If he remembers any of the terrible memories locked away in a box, he can become enraged or distraught depending on the memory. Following joining the church he's also been avoiding cursing around the other members unless it is absolutely necessary.

Don't let the caring, loving person that Jackson is fool you. Deep down, he has a demon that dwells, and Elder Spencer has claimed to want to aim that demon at those who make enemies of the church. He is very violent, very psychotic, and above all loves to toy with his victims as he tortures them. His favorite sound is that of someone gurgling on their own blood as they suffocate trying to breathe.

The Church of Jesus Christ of Latter-day Saints

Spencer Smith A.K.A. Elder Spencer - The man who started it all

Garry Roche A.K.A. Brother Garry - The muscle of The Blood God (wants to open a gym with the aid of the church)

Hannah Hiltop - "Lied" about Spencer preaching "The Good Word" in the Vanilla Unicorn which resulted in a three-day ban from V.U.

Satan - He believes that the Demon that dwells within him is either Satan, or a creation meant to stop him from completing his work.

Molly Minaj - Attacked Brother Mehof's work wife Carmella Corset by running her over, then sending Benny Harvey to brutally beat her with a crowbar.

Shadow Clan - not much known of them

Jackson's Lore Within the City

(Looking for a Loremaster to edit this as it happens) 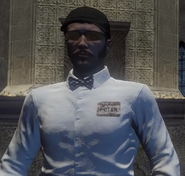 Lieutenant Brother MeHof
Add a photo to this gallery
Retrieved from "https://nopixel.fandom.com/wiki/Jackson_Cole?oldid=91445"
Community content is available under CC-BY-SA unless otherwise noted.