Iroquois "Snake" Plisken is a character role-played by SilentSentry.

He is a covert ops type, who sets up missions for other characters. John's likeness and character are based on Snake from the Metal Gear franchise. His last name 'Plisken' comes from Escape from New York and the sequel Escape from L.A. (ex. Snake Plisken) Snake has done a lot of missions with Uchiha (Raiden), including the Bovice prison break.

Snake was given life in Bolingbroke Penitentiary with the possibility of parole for his numerous crimes. He was placed in max security near Maximilian "Yung Dab" Thoroughbred and not allowed to interact with anyone. After months of good behavior he was allowed into general population.

He managed to successfully escape prison along with several other inmates during a huge prison break. He decided to go back to help downed escapees Eugene, Ricky, and Alabaster Slim which unfortunately led to his recapture. He is now back in prison and hopes for a chance at freedom one day.

Snake was allowed back into general population for several months due to good behavior. He met Bovice and they discussed the prison economy and future plans. Snake still wanted freedom. Snake saw the perfect opportunity to escape one night when the Chang Gang chose to help Wayne Biggaz escape. They set up a jailbreak and took down the guards and police and freed several inmates including Snake. Snake is now free and on the run, he uses disguise and clever hiding places to evade law enforcement. 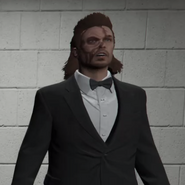 Retrieved from "https://nopixel.fandom.com/wiki/Iroquois_Plisken?oldid=73706"
Community content is available under CC-BY-SA unless otherwise noted.