The International Burger Society was a cult-like organization which was founded and was led by Shelly Smith. Its primary actions used to involve snackrificing people to the Burger Queen (who Shelly thinks she is the incarnation of), as well as scheming attacks, both violent and nonviolent, against the Rooster's Rest.

After having statues erected in her likeness in Burger Shot as well as toys made of her that spread throughout the entire city, Shelly Smith's idea of herself grew exponentially. The idea of the Burger Queen and the Great Burger in the Sky kept growing in her head, to the point where she began viewing herself as the physical manifestation of their will in the realm of mortals.

All of this resulted in an escalation of Shelly's activities regarding the matter, to the point where she began asking for offerings to her statues, praying to them constantly, and even snackrificing people to them whenever she could. As a natural conclusion to this, she eventually began leaning towards the idea of a cult, an idea which she eventually decided to transform into a reality along with Scruffy Doodle, a business clown who shares her love for burgers.

After finding a location for their headquarters, they started scouting out potential candidates for their cult by offering them sacred ketchup packets and judging the manner in which they make use of those packets; promising candidates were promised a part in something bigger, something far greater than themselves.

Shelly has since retired from the IBS as she is now an officer with the LSPD.

Joining the IBS did not necessarily mean that one has to be a Burger Shot employee. Indeed, after Shelly spent her first night in jail for the failed Rooster's Rest toy heist in which she killed the hostage and shot at cops, she became much more open to the idea of working with forces of questionable morality.

Our Burger Goddess, who art in ketchup, flame broiled be thy name.

Thy lettuce and bun, Thy rimjob and gun, the snackrifice has begun.

May the ketchup flow like the blood from the Bleeder. 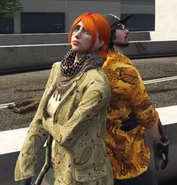 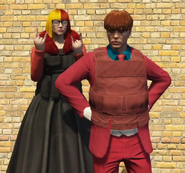 Shelly and the IBS snackrifice Cindy Tipton in their third snackrifice
Community content is available under CC-BY-SA unless otherwise noted.
Advertisement