Special Agent
Heath Mercer is a character role-played by aleks.

Heath Mercer is a Federal Investigation Bureau Agent who has recently arrived to the city of Los Santos.

Heath is of fair complexion, has short black hair, and a short cut beard. He talks in a low raspy voice. He can usually be seen wearing a black suit with sunglasses and an ear piece.

Not much is known about Agent Mercer's personal life, as it is classified. Before coming to Los Santos, he was stationed in New York. Although he comes from New York, he has stated that his name is from the coast, suggesting that he wasn't born there.

Before arriving at Los Santos, Mercer had a layover in Utah; due to him karate chopping a woman on his flight and fighting an air marshal. This caused him to arrive late, as he was detained by the police in Utah. They held him for two hours and confiscated his phone, sunglasses, and weapons. He claims the fight started because he was hungover from the previous night, which is also the reason why he forgot his FBI badge in New York.

Winchester is a Special Agent from the FIB that was tasked to work with Mercer to transport a few art pieces (The Starry Night by Vincent Van Gogh was among them) that were confiscated by the Mission Row Police Department.

Winchester is the first person that Mercer met in the city of Los Santos. He picked Mercer up at the bus station, debriefed him on their mission, and helped him get started in the city. Together they succeeded in bringing the art to Agent Javier Alvarez at the airport, but were held up at gunpoint and robbed by three unknown individuals before he could take off.

Mercer without his sunglasses

The art pieces Mercer and Winchester were transporting 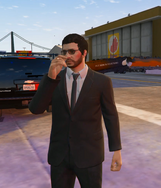 Agent Mercer smoking
Add a photo to this gallery
Retrieved from "https://nopixel.fandom.com/wiki/Heath_Mercer?oldid=57769"
Community content is available under CC-BY-SA unless otherwise noted.