Hannah Hiltop is a character role-played by adeptthebest.

Hannah is the daughter of the owner of the Hiltop Hotels and prides herself on being an heiress to the Hiltop name. She moved to LS and became a stripper at the VU originally to spite her father, but ended up falling in love with the people she met there and the city.

She is an airhead and self-described socialite who believes her privilege carries over into the streets of LS, however she quickly realized her privilege and her dad's money doesn't protect her from gun violence in the city. 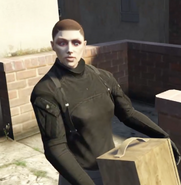 Old Hannah
Add a photo to this gallery

Retrieved from "https://nopixel.fandom.com/wiki/Hannah_Hiltop?oldid=110955"
Community content is available under CC-BY-SA unless otherwise noted.