Chief of the HOA

Marvin Chunder
The HOA/HoA (Homeowners Association/Hogs of Anarchy) is a motorcycle club, of whom were originally contracted by Payne Real Estate to protect the communities of Mirror Park and Vinewood Hills.

Previously, the aforementioned Vinewood Hills was under the jurisdiction of the HOA, however due to their sustained presence and governmental changes to the city, criminals were largely driven out of the area. This resulted in the HOA voluntarily abandoning the area in favor of focusing more on creating their own sovereign nation in Mirror Park. However, this idea was abandoned after several months, along with regular patrols (also due to a lack of criminals in the area, coupled with the boredom associated with the task.)

The HOA Headquarters was based in Vinewood at 25 North Sheldon Avenue. It was mainly used as a storage facility and armory building. Siz voluntarily gave up the HQ in favor of being able to maintain business ties with Matthew Payne.

The HOA now use the Mirror Park Tavern for their meetings and as their primary hangout spot.

As the name implies, the group was initially a Homeowners Association for the Mirror Park (and formerly Vinewood Hills) community, officially backed by Payne Real Estate. The HOA does not accept the label of "gang", as they prefer to be referenced as "only a terrorist organization" or most recently as a "book club". This is in part due to them wanting to avoid criminal charges that only get associated with "gangs" by the police.

The HOA was founded by Mirror Park resident homeowner, Siz Fulker,in an attempt to lower the crime rate and raise the property values in his neighborhood. HOA members patrolled the Mirror Park and Vinewood Hills communities to keep crime out of these neighborhoods. Anyone caught doing such acts were immediately removed from the area and got taken to speak with the Mayor of Mirror Park (or were dealt with by their arresting HOA officers) to ensure that such acts would never happen again.

All residents and persons using any Mirror Park and/or Vinewood services must pay a fee of $10 for HOA services and presence.
In addition, the HOA maintains a "Ban List" of those deemed unwanted in the community.

Their first arc, known internally as "Season One", was the period immediately after the group's founding up until they were contracted to protect Payne Realty properties. During this time the group heavily patrolled Mirror Park to both: enforce vigilante justice on anyone caught violating the law (speeding on the straightaway through Mirror Park was a common occurrence) and generally harass those who went to the area for a benign fee (as a parody to the then common "hood tax"), settling on $10. While catching burglars did occur early on, it became their primary focus by the middle of this arc, superseding most other minor crime. At this time they were also building their image with the police, with the high command at the time being personally supportive of their actions (although such support wasn't shared with the majority of the lower officers, of whom viewed and treated the HOA as a highly illegal vigilante group.) Towards the closing of this arc is also where the Lady of the Lake mythology arose, stemming from the group's depositing of seized vehicles in the Mirror Park Lake (referred to as "imponding".) At the time the group had not begun seriously worshipping (or had even been seriously aware of) the deity residing in the lake (with "feeding" cars to the Lady of the Lake being more or less just an excuse as to why they deposited vehicles in the lake rather than calling the police for a proper impounding.)

Their second arc, known internally as "Season Two", began after they were officially contracted by Payne Real Estate to protect their properties from burglars. Siz Fulker managed to secure this contract via his personal connection to Payne, thus becoming a legal security group. A central plot point for this arc was the group's constant friction with those attempting to burglarize properties within their contracted areas, now also covering the Vinewood Hills community. At first, their primary organized opposition was in form of Black Betty, Inc., based in Vinewood. After the dissolution of Black Betty, unaffiliated burglars tended to be the norm, at least until a new gang, the Misfits, moved up to Vinewood and began burglarizing (until they moved time zones to avoid the HOA.) As a result, this arc also saw both the apex and conclusion of the group's regular nightly patrols for burglars in conjunction with their greatest territorial acquisitions and losses. The apex of their patrols occurred during the initial few weeks after the expansion into Vinewood Hills, when unsuspecting burglars hadn't yet become aware of the HOA's danger. Afterwards, the patrols slowly drew down as criminals changed their sleep schedules to avoid the HOA, shifted to burglarizing the South Side houses (the one area that was both: outside the HOA's coverage and profitable to rob), or simply ceased burglarizing altogether. Eventually, the patrols slowed to a halt near the conclusion of this arc as they became less and less eventful. This is what led to the HOA giving up Vinewood as they had considered the area pacified due to a consistent lack of burglars on patrols, choosing instead to focus on Mirror Park. Around this time the group also saw a shift in their self-image. Up until this point, members had thought of the HOA as a sort of "side job" with a group of friends and not a gang, this led to a cacophony of various gang members joining the organization (either temporarily just to partake in a night's patrol, or on a more permanent basis, e.g. Juan Carlos Hernandez.) This was forced to come to a conclusion after the group ran into trouble with gang-affiliated members drawing unwanted attention while on the job, especially when encountering members of other hostile gangs while doing HOA work. This lead to several gang-affiliated members being let go, with no ill will. This arc came to a close with Siz Fulker striking a deal with Matthew Payne to officially revoke the group's contract to patrol his properties, destroying the groups ability to operate legally, and fully shifting the HOA to be crime oriented (a process that had already begun near the end of the arc as group members began regularly doing heists with one another outside of their HOA duties.)

The next arc began and ended in the month of December, 2019 when the HOA secretly became a terrorist organization known publicly as the Crimson Boomers. This arc ended when Siz was arrested after committing an act of terrorism in Crimson Boomer attire, with a USB containing incriminating evidence, in front of MRPD. The resulting fallout to rescue Siz got most of the group held until trial through the holidays, after which the DoJ dropped the case on them entirely after it was determined they were deprived of their constitutional right to a "fair and speedy trial".

On December 28th, 2019 Siz lapsed into a coma after being shot by Theodore Martin, not awaking until January 31st, 2020. After which, the HOA moved into their next arc, referred to as "narcos season". However, in the interim between the two arcs (during the one month of Siz's absence) Denzel took it upon himself to begin a purge of HOA members, firing Mary Mushkin before later quitting himself to focus more on the Leanbois. During this arc, the group conducted a massive weed cultivation and trafficking operation via a new headquarters building in Vinewood. This arc ended when government changes as to how weed was grown curtailed any ability for the group to maintain a large grow operation.

After "narcos season" the HOA moved into their current arc of becoming their version of a motorcycle club, the HoA. They are now officially known as the Hogs of Anarchy MC, keeping the HOA acronym intact. With this change, Siz also had the Mirror Park Tavern constructed as a new hangout area (replacing his personal Mirror Park home and the former Vinewood HQ) and future bar (that holds an illegal moonshine distillery) for various people to work in. However, consistent delays kept construction crews from actually installing the components needed for a functional tavern; leading to a period of several months of inactivity on the business side of the tavern. Most recently however, Dante Thomas (with Siz's blessing) decided to begin operation of the tavern in spite of the lack of functional equipment (serving bottled alcohol in the interim.) Thus far, the hallmarks of this arc have been: the further development of the Lady of The Lady mythology (with the entire group actually meeting the Lady of the Lake and introducing another deity known as the Father of The Fire), the extensive amount of wars the HOA has participated in (including their first loss), the extensive amount of recruitment that has taken place throughout the arc (ballooning the gang to a record 20 members), the presence of numerous short sub-arcs, and the diversification of the HOA's position in the city's criminal underworld.

An example of one of the current arc's sub-arcs, while keeping the same name and overall behavior, from September-December 2020 the HoA publicly identified as a book club rather than a MC. This resulted in them no longer being legally labeled as a "gang", allowing for members to more easily own and operate businesses publicly affiliated with themselves. However, they were not able to maintain this façade and after being arrested in one too many gang related shootings the group regained their gang tags by December (although with little to no real effect on businesses owned by members.)

Removed for betrayal; was tortured, left for dead and then had his pinky sliced off.

Removed after a shootout with Siz, Denzel, and Ricky (Leanbois.)

Removed due to prolonged inactivity and prominent affiliation with a gang.

Removed due to prolonged inactivity and prominent affiliation with a gang.

Distanced and removed himself from any association with the group.

The HOA with Ripley and Zero 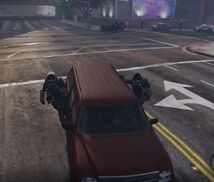 Siz looking out from the former HOA headquarters.

Kray-Tor looking out from the former HOA headquarters.

Huck, Julio and Daryl with Anderson, the famous HOA AD guy, standing in front of the HOA Brawler. Photo taken by Siz. 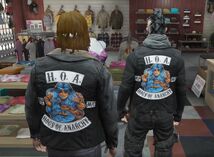 Siz and Kraytor in the Hogs of Anarchy vest, showing the prominent design on the back.

(L-R) Huck, Kray-Tor, Siz, Julio and their Old Lady in front of the Mirror Park Tavern. Photo taken by Zelda

HOA taking a photo beside their mural

Retrieved from "https://nopixel.fandom.com/wiki/HOA?oldid=75579"
Community content is available under CC-BY-SA unless otherwise noted.