Upon his arrival to the city he was quickly adopted by Whitley Booth & Harry Phartz. Gumbus was picked up from the hospital by Whitley, when "abduction" turned into "adoption". Later on it was discussed between Whitley & Harry, that Harry would be the step mom to Gumbus.

There is much confusion through the city on how Mike Bayo became Gumbus' step father. However when questioned about, it Bayo refuses to answer; even few members of law enforcement are aware of the situation.

Speaking of family, Gumbus' claims to every officer that he meets that they're either his father, or his best friend, in spite of a extremely flawed plan. He hopes one day this will cause conflict inside the PD, where all the officers turn on each other, & while they are fighting, he will sneak inside the PD & delete his file.

Coming Up in Los Santos

A few weeks after being in Los Santos, it was very hard for Gumbus to find his footing in the city. Usually was just found chopping cars on his own, or just tagging along with acquaintances, up until he met Lexi Law. Nobody gave him much opportunity & it was hard for him to make friends. Lexi gave him a few simple tasks, eventually leading to Lexi being the main reason why Gumbus is employed at Clucking Bell Farms, Vultur Lé Culturé, & even opening PawnHub with her, being her COO. Because of this, Gumbus claims his "OG" is Lexi.

Meeting Kian Mercer doing deliveries long before Kian was with the HOA, you can often find them hanging out with each other across Los Santos. Because of this, Gumbus has met a wide variety of HOA members, who eyeball Gumbus as a reliable backup.

After helping the HOA with several tasks, both Julio Thomas & Kian Mercer told Gumbus that he was HOB (HOA B-Team). However, with how often Andi Jones & Gumbus got in petty arguments; Gumbus denies being HOB due to overhearing that HOB was "Andi's little minions", to avoid any confrontation with Andi, as he tries to heal their relationship.

He later was officially invited into HOB.

• Enjoys car racing and clams to be the B class king 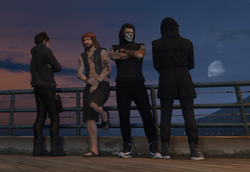 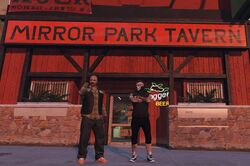 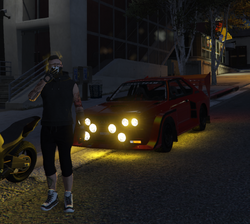