Griselda "Zelda" Harth is a character role-played by Hirona.

Griselda Harth, better known as Zelda, is the youngest Harth sibling. She is the sister of Jacob Harth, and the late Simon Harth. Like her brother, Jacob, Zelda is very stoic and mysterious. She tends to appear and disappear without notice. Not much is known about her, though she is known to always carry a knife on her person. She has stabbed a dog to death in self-defense, though tells others to not harm animals if they are no danger to them. She is employed at the Clucking Bell Farms, and knows the routes of Los Santos well; having the ability to locate specific points on the map without guidance. Recently, Zelda has helped out her boyfriend Siz Fulkerpush out cocaine to the city.

Zelda is part of a group that runs the Dark Web, known as The Watchers. She works with her brother, Jacob, and Wilson Robins ("The Citizen"); performing various tasks such as stalking, taking photos of specific locations, and murdering others (when necessary).

Zelda had first heard of Siz Fulker at a meeting with Mother, Steven Mathis, and Maxine Jackson, who all expressed their distrust of Siz, and their plans to distance themselves from him. She officially met Siz at the Pink Cage, while he was on his way to his room. Siz saw her, and commented on her cute glasses. Zelda was later approached by Yung Dab, who told her that Siz was "having a bad week after being ousted by his family, and would appreciate it if she would go on a date with him". Zelda agreed, but also said that she would not give him a handjob.

Bobby Smith and Zelda first met during a traffic stop, where Bobby gave Zelda a warning for running red lights on her bicycle. Afterwards, Bobby attempted to pull her over for another traffic violation, but accidentally knocked her off her bike with his police vehicle.

Although at first Zelda had vowed to have Bobby killed for that incident, she would eventually find herself being adopted by him and his husband, Vladimir Raven. While speaking with Bobby over the phone about his wedding, Zelda somehow convinced Bobby to be her father. Later that day, Bobby invited Zelda to the house that he planned to buy with Raven. The couple decided to officially adopt Zelda as their daughter, and were informed that Denzel Williams was her God-Father.

Shortly after, Zelda attended Bobby and Raven's wedding, and told guests that she had two dads now.

A quirk in this parental relationship is the apparent ignorance of Zelda's true age. Raven, Bobby, and Denzel believed her to be 17; despite her legal identification, personal insistence, and overall appearance indicating that she was a woman in her early 20's. This has resulted in some embarrassing treatment on her end, as her fathers tend to treat her like a child. Her God-Father, Denzel, even bought Zelda some "Bratz" dolls as a Christmas gift in 2019. Denzel believed that the dolls would appeal to Zelda, even though he was told by Siz that Zelda wouldn’t like them. 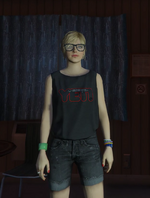 Zelda in her kill dress 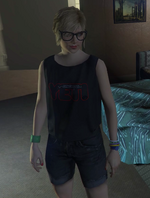 Zelda taking a picture of the power plant.

Zelda in her room. 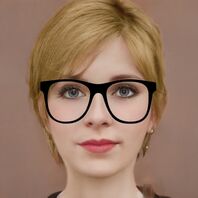 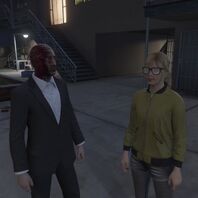 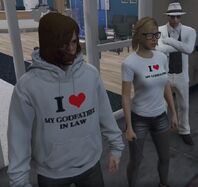 Zelda and Siz in their complimentary godfather attire