Grimoire, aka "Gremlin" or "Grim," is a violent criminal who is wildly unpredictable, and has a reputation for being mentally unstable.

Gremlin frequently implies that she is actually a demon from Hell possessing a human body, and occasionally plots to form a religious cult with the objective of drilling to the center of the earth.

Her brother Graham has neither confirmed nor denied that her claims of being a demon from Hell are true; all that is confirmed is Graham arrived in Los Santos to return Gremlin home to their "powerful father."

Gremlin is currently seen selling weed, and planning to take control of the chop area as a HQ for her drill cult. 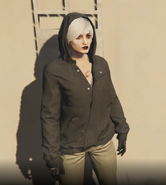