In a relationship with
Axwell Eriksen

Coming to consciousness, I wipe the sleep from my eyes and stand up as I take a look around. I find myself in a small, unfamiliar living room and realize that I was asleep on the couch. I look down at my clothes and realize that I don't recognize them, either. With panic welling up in my chest, I look around the rest of the apartment hoping that something will trigger a memory of where I am or how I got here, but nothing clicks. Then, my adrenaline-fueled thoughts come to a full and complete stop as my mind focuses on a single word: I. Who the hell am I?

I walk to the bathroom and stand in front of the mirror, looking critically at my reflection. Long dark hair, green eyes, and full lips stare back at me as I rack my brain for any shred of personal awareness: my birth date, a childhood pet, or even my first name. I crumble to the floor in a cold sweat as I begin to realize just how screwed I truly am. I remember how to walk and talk, and that 2 + 2 = 4, but have no clue as to where I'm from or what I do for a living. And forget about leaving this apartment anytime soon... how can I carry on a conversation without knowing anything about myself? Personal details are the first things people ask for when meeting someone new... but how do I remember crap like that, yet forget my own damn name?!? And yet, I'll have to go out into the world if I have any hope of figuring out who I am and how/why this happened.

As I pick myself up off the floor and cast a final glance at my reflection to make sure I'm presentable, my eyes are drawn to the outlines of a phone and a wallet in my pockets. With trembling fingers and bile rising in my throat, I pull the items out and pray for even the tiniest of clues to get me started and give me the strength I need to exit the building and join the outside world. I open the wallet and extract the Driver's License of Grace Daniels... who looks exactly like the woman I saw in the mirror. Yes, I have a name! But is it really mine? I say it aloud a few times to try it out; it doesn't seem familiar, but it also doesn't feel unfamiliar. I shrug my shoulders and check out the listed date of birth... February 29, 1996. So, that makes me 25? Seems plausible. It looks like I currently live in a place called San Andreas and that I know how to drive.

Wondering what else I can learn, I put the license away and look at the phone. Thank goodness there's no passcode! No contacts or texts, but the Twatter and Yellow Pages apps might be helpful out there. Let's see if there's anything in the bank... Ouch! I'll definitely need to find some temporary work while I figure things out. I put the phone and wallet back in my pockets, check for keys to the apartment, and head for the front door. I pause at the door and square my shoulders. "No more stalling," I tell myself as I exit the apartment and close the door behind me. 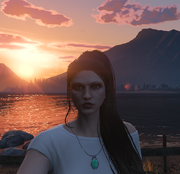