Windsong had a fascinating love life and is Siz Fulker's ex-girlfriend. She accompanied him in heists and lowkey criminal activity, despite being a very nervous and continuously scared person. Although being almost polar opposites, they did share the same level of awkwardness and eccentric personalities.

She has an electric car that's usually yellow named Sunflower; she changed it with different colors after the breakup with Siz. She turned it green, naming it Kiwi, and later orange, naming it Tangerine. She treats it like a friend but also showed anger when she lost a race against Siz's fully upgraded Brawler.

Windsong has been overall a very peaceful person and loves the environment, always striving to enact social and political change. She is a vegan and chatty person. This sometimes gets her in trouble with some other characters in the city, which are not very fond of her "talking too much" (Mother). Many people also often mess up her name and have many variations such as Windex, Window, Windbong, etc. Some might say her name has been similarly butchered much like that one actor, Bendlesnert Cumbercatch.

Their first interaction was when Windsong encountered Siz at the Pink Cage, she ran away in fear and called him a zombie. She was disgusted by his face because it reminded her of bloody meat, something that she hated seeing because she was a vegan. In subsequent interactions she would try to not look directly at Siz when talking to him; however, she did apologize to him about her initial harsh reaction and hoped to gain "good karma" from the apology, even going as far to defend him from other people's rude comments about his scar.

They would meet later after Siz got his 'rejuvenation suit.'

Siz would later get his first erection while wearing the suit, Windsong explained why he was having one and then took Siz to the hospital to remove the suit so he could deal with the erection. But Siz lied to her about his age (claiming to be 14), causing Windsong to leave out of embarrassment. Luckily Windsong befriended and met a would-be doctor. This doctor would later help Siz out of his suit. Windsong and the doctor talked about how Siz lied about his age. Upon the doctor removing Siz's suit, Siz realized his face was also fixed. Windsong was surprised and happy that Siz actually got his face fixed and now no longer has to see his bloody face.

Windsong and Siz are hanging around talking about the weed he got. But then a Taco truck his Windsong's car and started beating her up, Siz finally becoming an alpha in his eyes, saved her by beating the Taco Truck driver and driving her to the hospital and later even calling her his girlfriend.

Windsong and Siz would later drive off again as Windsong asks Siz, would he beat people again, as Siz replied, he'd do it again for her. A Taco Truck slams into them and hits Windsong once again, Siz and Windsong beats the driver and drove into Siz's secret hiding place which was behind a club. Siz and Windsong were irritated by the loud music, and Siz rolls for the DJ, ultimately stabbing him without Windsong knowing.

They would later go into a place where Windsong knows some hippies. Siz accidentally got into a fight and burned in a campfire. They were saved by Heidi. A random local started trailing the injured Siz, angered, Heidi, punched her in the vagina.

Planning on his own, Siz found the Taco Truck headquarters and plans to burn it all down. He brings Stevie and Windsong to help him, but Stevie didn't like it. It ended with all 3 of them getting burned.

Emotions high, Stevie got mad that Siz is turning into a life of crime, he knew Siz as a defenseless innocent person, but ever since he knew Windsong, it was the exact moment Siz started doing crimes. Stevie saw that Windsong is turning him into drugs and crime and would later drive them in a top of a parking lot with Kelly.

Windsong and Stevie got into a heated argument and made Siz choose between the Family and Windsong. The pressure was too much for Siz, making him jump off the roof. This injury would cause his face to be injured once again.

One day when talking about Heidi's Ice Creams with Windsong and his brother Stevie, Siz heard a noise coming from the pool area on Pink Cage. They were enlisted by what Siz called a 'ninja looking guy,' who identified himself as John. They were to do a mission that would 'save' the city. Windsong opted to join in since she thought she would save the world, while Siz and Stevie joined in given Windsong and Siz were dating at that time and Stevie was brought in as a third member since they were looking for a third.

Before the three met, Siz and Windsong were looking for a third member, and they got desperate enough even to recruit a random person who Windsong punched after he asked what's wrong with Siz's face. It started with Siz calling his "best friend" Kevin to join them in the mission. Kevin being a good lawyer, knew he shouldn't partake in any 'bad' activity with Siz if he were to save Siz in court. Thus ultimately, Kevin refuses the offer to join them. In this time, Windsong taught Siz how to gamble with dice. Also, Windsong was on a sight strike during that time because of the parking lot incident that caused Siz to get half his face injured again. Siz played along and lied to her with the dice scores, he let her win despite her loyalty to her strike and not look at the dice and rely on her opponent's will to say what their score was. With three dice, Siz told Windsong she got 19, which was impossible.

As the three (Siz, Windsong, and Stevie) are ready for the mission. They would later meet Edna, and an older woman who seems to be either delusional, a veteran worker for the force or a crime doer. She would give them code names and know what their skills are.

Siz Code named 'Hospital' = Power to be immune to the cops; this is due to his blind belief that he can't be caught because of Kevin always having his back.

Stevie Code named 'Pizza' = Power to see very far given his glasses and ability on computers given his past facebook job.

Edna would berate the three, given their wild reactions and unnatural responses and call them millennials. She would teach them to grab flashlights and do a pretend bank heist. On the bank, they started writing notes on paper saying 'this is only a drill.' Given there was only one guard. Edna gave the signal to shoot him.

Windsong still on her sight strike, misses her stun gun. Edna needing to react back given the cop started shooting them, pulls out a stun gun. Stevie tried running away but was accidentally shot by Edna as he blocked the way Edna was shooting. Siz would later accidentally punch Windsong. Cop hits and injures Edna. Siz goes in and beats up the police. Siz even accidentally hits Edna's injured face. All 4 of them hurt, needing help, as Edna shat on Siz's shoulder and face.

It would end with them in the hospital, with Edna singing 'Baby Shark' to sleep.

"John" would recruit the trio of Siz, Windsong, and Stevie to save a hostage on grove street. This ended poorly yet successful to their eyes as all three of them got heavily injured causing Siz to get his lungs punctured and Stevie to get his balls bit by a dog, but the hostage managed to escape during the police interference. A dog got shot down but later revived by the ice cream cop, Heidi. Kevin about to sleep, see's all three of them moaning from pain. Kevin is so disappointed they tried doing a mission that was clear on him that they were being used. Kevin is so frustrated he gave them his keys to his expensive car and after a long discussion about doing bad things. Kevin ultimately went home to sleep disappointed when the trio just followed a running convict shouting language they couldn't speak thinking it was the hostage they saved.

Siz would later see on his radio signal that a huge prison riot broke out that killed almost all police officers in the city, giving him free reign to do all the crimes he can. He started hearing both voices and his impulses to do as many crimes like the jewelry store and multiple convenience stores.

Siz Invites Windsong with his newly bought home, revealing his Weed plants and even lets her decorate the house. This let the Family know about Windsong's interference and her capacity to tattle to everyone about the electronics shop idea.

Siz would later see Windsong injured in the hospital talking about a demonic emotionless voiced man shooting her and attempting to stab her. Siz knew it would only be Jacob. And this will be the start of the Feud with the Family Arc.

Windsong blamed Siz for the assassination attempt as his name was mentioned during the assassination. Siz knows that could be the only way to get her safe is to break up with her. Windsong called Siz a sexist given his impulses to get angry and order her around. Siz took the opportunity and got a bit too much saying mean sexist things to Windsong. It is debatable if Siz really was sexist deep inside or was doing it to offend Windsong to make her break up with him. He would later pass the time with Stevie trying to save a deer stuck in a store.

Windsong would later see Siz with his fully upgraded Brawler. Windsong wanting to prove a woman can drive challenges Siz to a race. She is driving Tangerine, an orange version of Sunflower. While Siz drove his Gomer improved Brawler.

The result was evident before the match started. Even on the 2nd race, Siz blew out his tires but fixed it, and later catching on and racing past through Windsong.

On the location, Windsong pronounced that she trained with John about CQC (Close Quarters Combat). Windsong wanted a duel between her and Siz; if she wins, Siz would respect women. If Siz won, Windsong would tweet about Siz being a great man.

In the fight, Siz surprisingly dodged all of Windsong's punches and beat her up so bad that she stopped the fight midway. Windsong tweets her end of the bargain.

Siz would drive back into his home only to discover Windsong and the Clown moving in as his neighbors. She would later find a pile of poop on her front porch, presumably left by Siz.

Windsong and her lover Happy D'Klown! 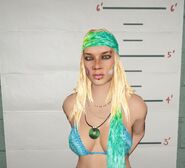 WindSong in “A Peek Into NoPixel” trailer

(L-R) Windsong, Eugene & Fiona in “A Peek Into NoPixel” trailer