Garry Roche is a character role-played by ShawW0w.

Garry Roche is the strongest man in Los Santos, he can lift up to 20 dumbells between his ass cheeks and eats up to 4000 calories a day in protein shakes. Garry is the owner and operator of Juice Up Gymnasium (J.U.G.S) located on Vespucci Beach.

He has provided training for the likes of Sasuke, Bjorn the Barbarian, and many more. He works hard every day maintaining his beloved gym early in the morning, making himself available every day for those who need physical therapy as well as pumping iron.

Garry is a sensitive person and loyal friend, sacrificing his own comfort to make sure others are happy. He loves to flex any chance he gets, often shooting multiple poses in under 10 seconds. He owns a car about as chonky as his own physique called Beefcake. Not much is known about his background or his family, he arrived in Los Santos by himself and soon moved in. He's soon engaged to be married and is on the hunt to find the rarest aquamarine gem for his bride-to-be.

Unfortunately Garry cannot wear normal clothes as his humungus mass rejects all clothing that is not stretchy enough to cope with his muscles, thus why he has to wear extra loose shorts and comfortable hiking shoes that stretch around his giant toes. 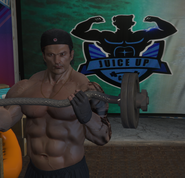 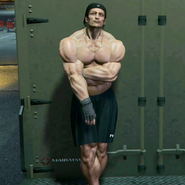