Gage Draider is a character role-played by Raided.

Gage Draider is a Corporal for the Los Santos Police Department, Badge #434.

He was previously a Corrections Officer for the Department of Corrections, Badge #734.

His former FTO, Clarence and Draider work very well together and have massive amounts of respect for each other. They are commonly seen riding together and some other officers refer to them as "Draidence" or "Drilliams".

Gage's Ex-girlfriend, Saphira is a very private person. When they dated, they would be seen going on dates or standing out side Pillbox Medical Center speaking to each other in innuendos or commenting about the current state of the city. 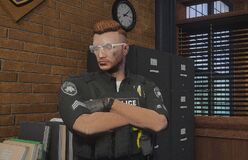