Freya Manning is a character role-played by Curvyllama.

Freya is a member of the Korean Mafia and married to Mr. Chang. Freya was a low-level criminal until she met Yung Dab and Tim Lee. Don't let her good looks fool you, she is actually 65 years old.

Tim initiated her into the Korean Mafia by getting her to smoke crack and jump off a bridge into the ocean. She once worked closely with Sun Moon and the Koreans. She was caught in the war between the Koreans and the Chang Gang which was difficult for her.

She married Chang Gang leader, Mr. Chang, as well as fellow Chang Gang member, Garrett Jobless in a three-way wedding. She was shot at her own wedding [1], but survived the assassination attempt and is still married to Chang and Garrett. She was also supposedly pregnant, but it was a just scam to get free gifts and money from people. 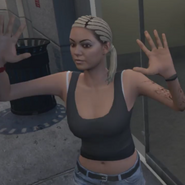 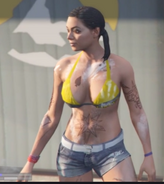