Fred Hurst is a character role-played by cyr.

Fred was once a famous musician in the late 90s and early 2000s, then he lost everything. He came to Los Santos to reclaim his fame and gain some respect. He quickly learned that no one in the city respects him. Fred enjoys confrontation and doesn't back down from a fight.

Early on, Fred's fearless attitude got him into many street fights which eventually gained the attention of the Aztecas however he never committed to joining them. After a pair of therapy sessions he also accepted that he's violent and angry as a result of his own personal insecurities.

Fred started rollin' with the East Side Ballas after making a connection with Jack Cortair and leader Tyrone Biggums. He sometimes goes by the streetname East Bizkit. 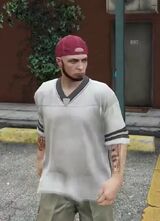