1. Leader of the Plums

Four Tee is a character role-played by Crystalst.

Four Tee is a soft-spoken woman who appears to be in her mid-20s. She almost exclusively wears an oversized grey beanie and a dark coat with a fur-neck collar. She often drives stolen vehicles in a reckless manner. Four Tee can be seen helping or antagonizing the citizens of Los Santos based on whether or not they are part of her list of friends.

Four Tee was socially isolated for most of her life. She remembers living in a "black box." In the black box, Four Tee knew a person she considered to be her "best friend." Her friend gave her a teddy bear one day as a present. Four Tee became afraid that she was going to lose her best friend, so she made sure that he couldn't leave by killing him. She doesn't remember what she did, but she remembers a blood-soaked teddy bear. After that event, she started referring to her best friend as "Teddie" and when she describes him to other people, she describes the bloody teddy bear.

Later, Four Tee woke up in a smaller, moving black box (likely the back of a truck) that led her toward light. She soon found herself on the streets of Los Santos near the golf course. In a strange new world and with her memories broken, Four Tee set out to find her friend, Teddie, and to discover the truth about her past.

Four Tee exhibits behaviors of various developmental disorders. She struggles to initiate conversations, and she acts nervous and stutters when she speaks. She prefers hiding from sight and observing people from a distance. However, she has been slowly developing more social skills since she came to Los Santos. She is able to hold longer conversations, and is becoming more skilled at complex emotional manipulation. She has even hosted social events for people to partake in.

Her moral compass is dominated by four categories: friend, enemy, safety, and harm. To Four Tee, anything that keeps her friends safe and harms her enemies is good. Anything that harms her friends is bad. Outside of these distinctions, Four Tee is morally indifferent to all acts. Her lack of remorse toward anyone who is not her friend often leads to violent and criminal behavior. When Four Tee encounters moral conflicts, she will construct a narrative to resolve them. For example, when a person tells Four Tee that they want to stop being her friend, she will tell herself that her friend is being manipulated by an enemy.

Four Tee's obsession with her friends is deeply ingrained and structures her entire reality. She wants to know everything about them: what they like or dislike, what they do, whom they talk to, etc. She will mimic her friends' speech and behavior in an attempt to get closer to them psychologically and personally. She goes to extreme lengths to stalk her friends. She will break into her friends' houses to watch them sleep and take pictures of them. She will sabotage her friends' relationships with others in order to keep her friends to herself.

While serving a long prison sentence for her role in the murder of Adrienne West, Four Tee has been overwhelmed with feelings of worry and helplessness. She found herself going insane due to being unable to be with her friends and to protect them.

Unable to cope with the pain, stress, and trauma of not looking after her friends, Four Tee is now repressing her feelings and memories, forgetting her purpose and what's important to her.

On February 26, 2021, 4T encountered a group of four bald men while she was with Guy Jones (#16) at the corner store next to Burger Shot. The men asked 4T questions about her life. When 4T told them about the black box, they acted surprised. The men forced 4T at gunpoint to get in the trunk of their car, and they drove off, leaving Guy Jones behind.

The bald men took 4T to an abandoned government building where they revealed themselves to be aliens. The aliens performed a mind control ritual on 4T and told her that she was now "Subject 7." The aliens seemed to have some difficulty with the ritual, and mentioned that 4T has an unusual mind that's hard to control. Nevertheless, 4T seemed to have accepted her new identity as Subject 7, which she called 7T. The aliens commanded 7T to keep their existence a secret and to kidnap the mayor of Los Santos for them.

That night, 7T contacted the aliens after discovering the location of the mayor. 7T met up with the aliens and started out for the mayor's location. On their way, they stopped at Rooster's Rest, where they encountered Guy Jones, who was trying to save 7T. The workers at the restaurant grew suspicious of the aliens and attempted to restrain them, but the aliens talked their way out of the situation. Before 7T and the aliens could drive away, Guy Jones jumped in the car with them.

The aliens took Guy Jones to a back alley and tested 7T's loyalty by telling her to shoot him. 7T was hesitant, but eventually succumbed to the aliens' mind control and shot Guy in the head. The internal conflict between not wanting to hurt her friend and wanting to obey the aliens' command was too much for 7T and she fell unconscious. The aliens delivered 7T to Pillbox Medical Center and soon disappeared. 7T (now going by 4T again) woke up in the same emergency room as Guy Jones, where she showed symptoms of dissociative amnesia. While 4T was receiving an MRI scan, the doctor (Noah Drake) noticed that that 4T had what sounded like two heartbeats. The doctor discharged 4T after determining that she was otherwise in good health.

4T soon received a call from Robert Spowylamywanowski (#-2), who told her that he was with Guy Jones at the ICU and asked 4T to meet him back at the hospital. Rob and 4T went to a secluded area to have a conversation, and Rob showed 4T a note from Guy Jones that read, "We need to talk. 4t betrayed me...aliens." 4T denied that she knew anything about aliens, and Rob revealed that he had killed two of them. He also confessed that the second one "showed [him] the light" before it died and that Rob was now working with the aliens. 4T then recalled the bald men she had run into earlier and told Rob about how they showed interest in the black box. She explained to Rob that she had hoped the bald men would have answers as to what the black box is. Rob showed 4T the vial of slime that the aliens had told him to put into people's food. The slime supposedly had the effect of making humans obey the aliens when ingested.

Rob then began questioning 4T about whether she shot Guy Jones. 4T confessed that she could see memories of shooting Guy, but she swore that it wasn't her that shot him. Rob pressed her further, and when asked whether the aliens had told her to shoot Guy, she told him that they had. Rob and 4T began to accuse each other of malice and deception, but soon came to a mutual understanding that both of them were somehow being coerced by the aliens and that the things that had happened around them were outside of either of their control. Rob and 4T parted ways after 4T promised to contact Rob if the aliens showed up again.

Anyone could get a number as long as their friendship with 4T is proven. It could be passing a challenge set up by her, winning the 4T tourney, or helping her when she needs it. Usually, a test or challenge is given to a person who has helped 4T a lot or has spent a lot of time with her already.

Friends are generally assigned their numbers based chronologically in the order that Four Tee first met them. However, friends can gain a higher number if they challenge the number above them. In such a challenge, the winner gets the higher number and the loser gets the lower number. They can also be removed from the list if they betray Four Tee.

Given that the importance of a listed person to 4T increases as his or her assigned number approaches zero, #0 refers to Teddie.

Four Tee regularly hosts 4T Tourney events, where anyone can participate and secure a number on the friends list. During the event, contestants face off against each other in various challenges; ranging anywhere from city-wide races to a one-on-one fistfights.

In addition, any of 4T's current friends may request to compete against a higher-ranking friend and attempt to rank up.

Four Tee keeps a running list on her phone of her friends[1] and enemies[2].

Four Tee has started her own taxi business, giving free rides to customers. Her goal isn’t to earn money through this, but to learn how to drive, explore locations and get her customers to become her eyes to help her find her friend “Teddie.”

Many customers haven't been able to make it to their destination, usually flying out of the car due to Four Tee's reckless driving and not wearing a seatbelt.

After a week of having little to no customers asking for a lift, Four Tee thought of ways to be able to get more customers. This entailed making it so that people would have no choice but to use her taxi, by "getting rid" of their vehicles.

After being reassured by Gladys Berry (Friend #39), she set out to blow up people's cars around the city. Mel Rickenbacker (Friend #2) helped her set the cars on fire, by using his Lamborghini after Four Tee had poured the gasoline and left a note: " Use 4T Taxi :) ▪ 415-419-7896 "

After many close calls with the cops pulling up as they fled the scene, they were finally caught, due to a set up by "Bad Jimmy" (undercover BCSO Detective, Randy Wrangler). Four Tee and Mel were charged with Terrorism, and were to be held in prison until further notice. The Terrorism charge was eventually dropped, as it was later ruled to just be Extortion.

Four Tee inflicts some of the weakest physical damage in the city. When in debt, she's been known to sell her punches for $40, which people have either purchased for themselves or to inflict on someone else. 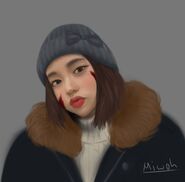 Ash, 4T, and Olivia by xymphonee

"The streets be cold, Bwo. Time to warm them up." by DirectorCM

4T at Burger Shot by AshVaen/ArkoGeno

Four Tee and Yeager by Bluetality_ 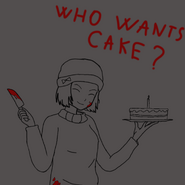