Shot to Death by the Los Santos Police Department

Fiz was the little big brother of Siz Fulker and possibly Julio Thomas, but now we’ll never know. He was morbidly obese, spoke as if he was going through puberty, and had an excessive eating disorder.

He came to Los Santos in search for Siz after his workplace got shutdown due to the coronavirus outbreak. He rarely went outside and all he did was play video games and ate excessive amounts of food, which drained him of all his money. He was heavily reliant on his mother, who Siz called a "stingy bitch". He was also deeply in debt and was being hunted by an unknown loan shark.

Oh March 22nd, 2020 Fiz was shot numerous times by the Police after Fiz held Jerry Perkins at gunpoint and demanded two-hundred fifty burgers from them. He died on Mirror Park Island. 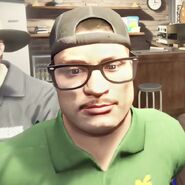