Finley "Finn" Milton is a character played by Sannmann_.

Finley "Finn" Milton is currently a Prospect for the Bondi Boys MC.

Hailing from Australia, Finley Milton was born and raised on the beaches of Sydney. Son of a former "Bra Boy", Darrell Milton, Finn was expected to follow in his father's footsteps and join the notorious gang. However, the gang began to fall apart during Finn's childhood, dashing his father's dream of having him continue the family legacy as a loud and proud Bra Boy. With the fall of the Bra Boys, and Finley's father's legacy, Finn's home life became more and more dangerous. Frustrated with the world, Darrell found any excuse to take out his anger on his family, especially Finley, who he saw as now useless to him. By the time he was 13, Finn spent most nights away from home, urbexing around the streets of Sydney either alone, or with his twin sister Sadie.

By the time Finn had turned 16, both himself and Sadie were spending nearly every night away from home, in order to excape the escalating violence of their father. As a coping mechanism for the horrible abuse he had faced, Finn developed an exceedingly friendly outwards personality, in an attempt to try and discourage any would be assailants from messing with him. Realising that the home they had was no real home, Finn and Sadie decided to strike out on their own, away from their parents.

Severing all contact with their parents, Finn and Sadie moved into a tiny apartment together, with Finn having to take out two jobs just to afford rent. After two years of living away from their parents, Finn and Sadie's bond had become unbreakable. Whilst Finn was uncertain of what he wanted his future to hold, and more concerned with how to keep himself and his sister afloat, Sadie was always a big dreamer, telling Finn all about her dreams to move to Los Santos and make a name for herself in the world of art. Whilst Finn always encouraged Sadie to persue these dreams, part of him longed for her, his only family remaining to not leave his side.

Sadie's death tore Finn apart. Due to the investigators covering up evidence to protect the son of the Chief of Police, Finn never found a resolution to the death of his only family. With his parents having disowned him after he left home, Finn had noone to turn to. The resentment of his father that he had carried for years finally reached a tipping point. Finn decided he was going to continue Sadie's dream of making a legacy in Los Santos, if not only to honor her memory, but to spite his father who said he could not.

Finn with Fey, Jesse and Ellie at the beach 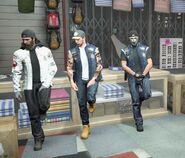 Chilling with Dundee and Barry

In a Talk with Jesse during a Storm 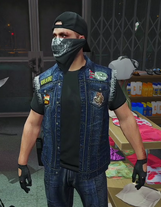 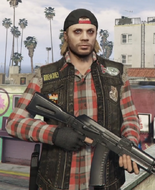 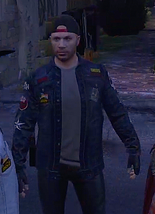