Fingle Goutman Dan is a character role-played by TheChief1114.

Fingle Dan is a bored old man who shuffle-walks amidst the city of Los Santos, born to a large family of Dans. Starting off in the city, Fingle would often hang out at the Roosters Rest with the D&D group The Guild aka the nerds, and "clean" as an unpaid intern. The Guild looks up to Fingle's immortal power and all-knowing, oracle abilities.

Later on, Fingle got a job at Burger Shot, the restaurant where the Fingle Sauce originated. However, due to employees telling Shelly that he never worked there and only stole food from the shelves, he got fired. Nowadays, he can usually be seen hanging out with one or more of his siblings or gambling all of his money away at the casino. If his gang, the Alta Street Ruff Rydaz, are around, he'll usually join in on whatever crime they're getting into.

On multiple occasions, Fingle has played the role of the patsy, and is willing to take heat for other's crimes as long as he's promised pay.

Fingle loves the thrill of crime, and finds excitement in high-speed getaways as well as foot-chases, in which he protests to the officers that he has a heart condition to avoid getting hit with a taser. He has also been notorious for his Fingle Skips, which involve pulling off an impressive trick or maneuver in a vehicle. During car-chases Fingle has amazing pit recovery and has been able to keep chases going until the car breaks. Even after the car breaks Fingle has shown knowledge of hiding spaces, even during car chases Fingle shows heightened knowledge of the city and surrounding area.

Fingle is an avid hunter, and has been known to hunt in suburban areas targeting dogs (claiming they are little furry deer's that bark) with his dad Freddy and brother Jeff.

Fingle has developed a unique form of dementia. It causes him to experience oddities such as being able to see into the void or feel time around him stuttering. As time progresses, it appears that Fingle's dementia can momentarily distort reality for those around him as well.

One day, Fingle was told by Svensen to find a particular criminal for a large sum of money. It took him less than a minute to find the criminal and Fingle was awarded $10,000 for his flawless efforts. Since then, Fingle and the other Dans have taken on the role of the informant. This entails Fingle informing the police about various criminal activity, usually for monetary incentives. He makes sure to let everyone know to report to him immediately in case they notice anything suspicious going on in the city.

It should be noted that Fingle's affiliation with the police does not stop him from partaking in the occasional car chase.

Despite being a incredibly skilled getaway driver, Fingle has a distaste for racing. His reasoning behind this is that hes not good at following directions.

What appears to be a lovable, sweet old man is actually a callous, hardened old man. Often ruining people's lives by way of snitching or by setting them up in fake house robberies, Fingle has been known to burn bridges and is often cruel and uncaring to any of his colleagues just so he can get what he wants.

There is only one person that Fingle cares deeply about and would never dare to double-cross him, and that would be a certain man, locked away forever, never to be spoken of again.

During the Meth Arc, Fingle's true colors were shown to an extent not seen before, he became cold and cruel even going to the extent of blowing a cops chest open. During this time he was paranoid, this most like comes from the fact he was heavily wanted.

Since becoming a cop, Fingle has started to appear more distraught, often times making sad comments about his family and how they were a form of torture for him.

Fingle Dan has displayed his prowess in getaway driving multiple times. This is mainly due to his increased map knowledge and his knowledge of skips and hiding spots. His style of driving is a mix of "Fingle Skips" and exhausting the pursuers.

Starting out as a cop, his pursuit driving wasn't much to talk about but after awhile, Fingle's driving improved drastically.

Fingle Dan is an expert in hiding, sometimes utilizing his iconic teal and pink sweater to hide in overgrown vines.

Fingle has an extensive amount of knowledge, usually being used for hiding and driving, but sometimes he uses it for positioning on top of buildings for getting the jump on suspects.

Fingle Dan exhibits a large amount of luck, in which he uses in things he usually doesn't succeed at like shooting and surviving through things he really shouldn't.

Fingle Dan is really good at persuading people into doing things for him. As well as talking his way out of many situations, usually bargaining his friends lives in return for his own freedom. He also is okay at coms.

Fingle Dan shows some aspects of being a "shooter", but doesn't have the best accuracy. Usually he just aims for the body and prays he fires enough bullets before he goes down.

Fingle has fought in every war, including but not limited too: The Trojan War, The Peloponnesian War, The Hundred Years’ War, The Revolutionary War, The War of 1812, The Civil War, Both World Wars, The Vietnam War, The Clone Wars, The Storage Wars, The War on Terror, and The War on Drugs. In recent history, Fingle Dan was reportedly involved in the accidental dropping of tea into the Boston Harbor on the 16th of December, 1773.

Fingle Dan, along with a few other Dans, acquired his immortality many millenniums ago. Historical artifacts reveal that Fingle was viewed as a powerful god in Ancient Greece and Rome. Other artifacts included a scroll detailing the tragic tale of Kinglemesh; a painting displaying the birth of the beautiful goddess Peachingle; and multiple swords and helmets with the names of Dingle, Wingle, Kringle, and Broskingle engraved on them. Although there are no records of Fingle making deals with the devil, one can only wonder where the source of Fingle's immortality lies. The same cannot be stated for the relatives of Fingle, with each of them seeming to operate by their own unique laws of reality.

Fingle Dan was about to be hung in 1899 for the multiple robberies of banks and trains and also for the murder of The Sheriff. However, Fingle slipped his head through the rope and said "Just don't die, lmao." Afterwards, Fingle ran away while everyone was dumbfounded from what had just happened.

Fingle Dan invented highly experimental weapons that were used during WW2. The defeat of the Axis powers is attributed to Fingle Dan. He was also the first man to walk on the moon. President Nixon ordered this accomplishment to be scrubbed from all public records due to rumors that Fingle was having sex with both of Nixon's daughters.

In 1969, during the height of the Cold War, Fingle Dan began assembling a robot that would be able to detect communists and vaporize them on the spot. Due to the cum-infused circuitry that Fingle installed, the robot's AI became far more sophisticated than had Fingle imagined and calculated that capitalism would defeat the USSR faster than it ever could. The robot soon after disabled any weapons built into it and swore to live a pacifist life. Fingle's dreams of controlling a human massacring machine were shattered so he went for the second best option: having a son that he (kinda) loved. He named the mech Rob Otte.

In the late 80s Fingle began conducting experiments to try to clone himself. His first clone was a failure, it became a monstrous heap of flesh with a taste for blood and was referred to as "The Blob". Fingle's second clone was a success and was named Jean Claude Van Dan. Fingle then made one last clone and named him Gene Claude Van Dan. The whereabouts of the clones are currently unknown. More recently, the Humane Labs and Research facility seems have become active again, although under unknown management. Farmers in the area have also reported hearing strange slurping noises late at night, followed by livestock mysteriously vanishing the following day.

In the early 2000s, Fingle Dan met a man named Greg The Bomber, who at that point was a nobody. Greg and Fingle would go on to become friends; Dan lost contact with Greg but the last thing he heard was that Greg changed his last name to Everly over an obsession.

On 23 March 2021, Fingle Dan steered a container ship partway through the Suez Canal.

On July 17, 2021, Fingle Dan and the rest of the Dans were branded as terrorists.

On July 20, 2021, Fingle Dan was shot in the head putting him in the ICU for 2 weeks, giving Fingle a scar on his head in the process. While in ICU, he dreamt that he killed Basem and then told people that he actually murdered him in real life.

On September 5, 2021, Fingle Dan, alongside Dingle Fan and Peachingle Dan, assisted Freddy Fastfingers in competing against other bank robbers to find out new information on robbing banks, which they titled "The Space Race".

On September 17, 2021, Fingle Dan, Broskingle Dan, Dingle Fan, and Fangle Dan went on a crime spree of murder, theft, and the acquisition of multiple class 2 weapons.

On October 11, 2021, Fingle Dan got a call from Timothy to be recruited into the Octopus Games.

On October 20, 2021, Fingle Dan and Wingle Dan teamed up with Chase Clouter to rob multiple stores and then get into multiple police "chases" in which they continuously escaped in a helicopter.

On October 29, 2021, the day of the Octopus Games, Fingle got eliminated after his number didn't get drawn during a game.

On November 1, 2021, Fingle Dan freed the ENUS from the impound after fellow Dan Bingle woke up and received a 200k welfare check.

On December 8, 2021, Fingle Dan "robbed" The Vault twice with Chase Clouter and Dingle Fan, one of those times was with Jean Paul and Marty Banks.

On January 18, 2022, Fingle Dan was brainwashed by Negan Graham, to become a sleeper agent.

On February 7, 2022, Fingle Dan was blooded out of the Alta Street Ruff Rydaz for being an op.

Fingle after paying off his loan, with a celebratory cigar in his mouth.

Fingle with his dad Freddy.

Fingle and Dingle taking a selfie after getting their new tattoos. 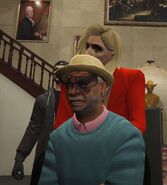 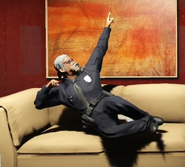 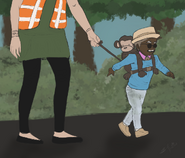 Fingle being compared to a child on a leash after learning how to drive with Tessa Lamb at driving school. Art by TyrianCallows

Book cover for Goutman & Pumper, a novel about the adventures of Fingle Dan and Randy Wrangler. By Vertical Mammal 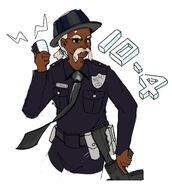 "It's Fingle Dan" by Kagnarok