Eve Summers is a character role-played by EagleAye.

Eve Summers, 22 is a boisterous environmental consultant from a small town in South Africa. Eve’s move to Los Santos was provoked by the recent demise of her own town. Her love and passion for fauna and flora stems from the luscious regions surrounding her as a little girl. Eve has the motivation to do better, not just for her herself but most importantly for others. This is to ensure that big cities like Los Santos do not make mistakes in ruining the environment.

Eve believes wholeheartedly that everything she does is for the good of the people and not for herself. She lives her life in simplicity to respect what she was given and what she as earned so far in life. To her, Los Santos represents a bit too much of moral bankruptcy of an overbearing busy city that throws away its responsibility to the environment. Eve’s role in Los Santos needs to be something that matters and makes a change. Eve can get the ball rolling by becoming a leader in her field, keeping the rich accountable for their actions while still maintaining her own goals. Eve sees the underutilized potential of Los Santos, there is value in the public spaces that even the major stakeholder is overlooking. Eve can take the time to make something of this, not just out in the county but in the city.

Eve is kindhearted, down to earth and typically tries to match other people's "vibes" to her own as a way to fit in. If she finds someone emotional and dreary, she will immediately try to act more like them to seem more likeable. A lot of people have found a liking in Eve due to how she acts and talks.

Eve is extremely naive and only sees the good in people, she tends to ignore the bad things people do as she doesn't want to lose those people as friends.

Eve is driven in her cause to make the city a better place. She is challenging in her decisions, to achieve a compromise between all parties involved. Charming is a way that Eve can enter a situation that she wasn’t necessarily invited into, but she can gently nudge her way in there. Sharing is a strong quality that she believes in, opening to others is important for her as she wants other people to be comfortable enough to open to her as well when they are ready to. Not a lot of people are as forgiving as Eve, but she has never focused on bad things that people have down but rather on being fair and helpful to people who need it.

In Eve’s line of work, a few bad qualities tend to slip through as her passion can fade and her obsessive nature to not leave a situation alone after she was told to not bother with it anymore. She can be impatient when waiting for certain results and a bit impractical when wanting to see how those results of her actions turn out. This all leads to her impulsiveness on a lot of life decisions, like moving away from her town to a brand-new city. Anyone can sell her a dream and she would be gullible enough to believe it, as she doesn’t know any better.

Her qualities make her this person that just wants to make a better place for everyone.

Eve has a short blonde pixie cut, blue eyes and freckles and can typically be found in her khaki shirt, denim shorts and colloquially "vellies" (A South African brand of walking shoes) specifically made for tough terrain trekking. She feels that this is a good outfit for the time spent in the mountains.

Eve's time in Los Santos has been eventful and goal orientated, she has been making a lot of friends that have been teaching her how to survive in the concrete jungle. Eve has been slowly making acquaintances with the right kind of people to make the move into the park, where she would like to start a successful hiking program together with the San Andreas State Park Rangers.

The Story So Far

One of Eve's first positive influences and mentors in Los Santos has been Abigail Sharp. She took Eve under her wing and showed her what to do in the city and what not to do. Abi approached Eve due to the Danny Doodle asking her too, as Eve resembles one of his exes. Eve has ties to the Sinister Souls MC due to Abi's affiliation with them and how Eve has had multiple positive run-ins with them, hanging out with them at their future compound, even petting their cute dog :3.

Danny Doodle calls Eve his best little sister, she always turns to him when she needs anything and he his willing to protect her when anything goes wrong. Danny has been through a lot and Eve never tries to pressure him into opening up into it. However, she tries to comfort him and make him feel as good as possible when they are together. Eve met her "other" little sister through Danny, Ellie Velasquez. A "fun ball of fire" is how Eve would explain Ellie.

Eve has recently learnt that Abi and Danny had a falling out and is thus very conflicted on how to treat them both, especially when they both want to spend time with her.

Eve has had extremely bad luck when it comes to fishing, she refers to the lake as the "Bermuda lake" as she never seems to finish her fishing or the "Aliens of Los Santos" targets her with planes or they just zap her boat from under her. The last event happened and she had a little swimming adventure to try and make this a success.

Sam Baas and Dante Wolf found her on the other side of the lake and was cautious at first but slowly grew to trust that she just had bad luck. Firstly, Eve offended Detective Baas as she didn't know that him and Dante where married. They had a lot of banter on their ride home to the city. Surprisingly to everyone, Baas and Dante found out that Eve was from South Africa. Eve learnt that Dante was from South Africa as well, she then started a conversation in Afrikaans, just to learn that Dante doesn't really speak it. Baas exchanged numbers with Eve for the future.

Freddy Fastfingers is a good friend to Eve and on their first meeting they bonded over him being a "ninji". Freddy and Eve decided upon an adventure or more like a scientific experiment to see if they could catch a cougar in a truck to bring to the city. Freddy borrowed a truck from the Delivery depot and they set off to the mountains with bait and a lot of optimism. They staked out a lot of hours and managed to catch and release a wild dog and a deer, unfortunately the deer died of shock. Eve has found a good friend in Freddy as he seems to support her dreams of starting a business in the mountains. 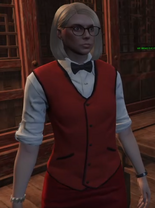 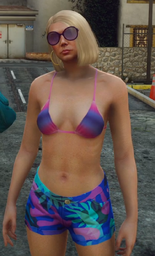 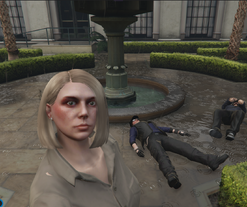 Apparently rain isn't as common in Los Santos, Abi and Doodles make water angels in the back
Community content is available under CC-BY-SA unless otherwise noted.
Advertisement