The Other Crack Fairy

Erin Cox is a character role-played by MEKABEAR.

Erin Cox is a former lawyer turned criminal living in the city of Los Santos.

She is a former member of the Angels, the first successful forming of a gang of (mostly) female members. She works for Jordan Walker as a Part-time Manager at Harmony Repairs Garage, and was a salesperson for Allen Widemann at Premium Deluxe Motorsport.

Erin was recruited into Mother's Family, as one of her surrogate children, and is widely considered to be the biggest disaster among them. She has been adopted by several others such as Jack "Joker" Knaves, Ronald "Red" Juggler and Jonelle Jones, however, a recent DNA test revealed that her first adoptive father, Roman "Black Mask" Sionis, is actually her long lost biological father, with her having been raised by an adoptive family, and unknowingly finding her way back to him years later after moving to LS.

Prior to losing her license, she was well known as a less-than-professional Criminal Defense Attorney. She was also the Chief Internship Officer (CIO) of Sahara International, worked at the Vanilla Unicorn Strip Club as a Part-time Manager under Evita "Mother" Nimm, and was a manager of the Doll House, an exclusive gentleman's club owned by Jordan Walker, but gave it up so she wouldn't have to compete against her ex-husband, Alabaster Slim.

Erin lost almost everything from her various mistakes following Arthur's disappearance from the city, such as her jobs, career, and connections, leading to her later turn to crime. She became close friends with her fellow gang members in the Angels before leaving them following a series of disagreements regarding trust and their direction. After her expungement failed to go through following a month of staying crime-free, Erin turned back to crime, throwing away her chance of becoming a lawyer again to rejoin her friends in the Angels. Unfortunately for her, Erin gets banned from rejoining the Angels again after ordering a hit in a fit of anger on one of their new additions, Blaine Burke, and is cast out as a "Fallen Angel", once again leaving her without friends or family.

Erin is a disowned trust-fund baby, who spent her life travelling the world and partying. Her (now revealed to be adoptive) dad is Maximilian Cox, the creator of the first tampon (that also cures yeast infections) - VagPax. She grew up having everything she could ever want, and therefore had no goals or drive. Erin blew a bunch of money partying and getting in trouble, until her dad disowned her; forcing her to make a life of her own. She's now in Los Santos trying to make it.

Erin's naturally brown hair has been dyed light pink, which she considers her trademark feature, and gets very upset when she finds others jacking her style. Her pink hair is contrasted by an almost exclusively black wardrobe. Erin regularly wears heels and high rise boots that usually leads others, particularly males, to believe that she's freakishly tall, and make exaggerated remarks about her size and stature. She has several tattoos: a triforce tattoo on her left shoulder, an arrow on her upper right arm, and a rose above her left knee. She used to have a pair of pistol wings on her back, as a mark of membership of the Angels, however, it was seared off with a blowtorch when she was excommunicated from them.

Erin has a wild and eccentric personality, and tends to catch people off guard with the outlandish and somewhat inappropriate things she says. She's also very hyperactive, as a result of her ADHD, and gets distracted easily. She's inquisitive into other people's intentions, and has no sense of personal boundaries. She is particularly honest, often to the point of self-snitching, and she frequently blurts things out, getting herself in trouble on a regular basis. Erin cares deeply for the friends she has made, and is willing to do almost anything for them, often times at her own expense, however, she regularly struggles with empathizing for others.

Erin has more than her fair share of issues. In her own words, she has a thing for "fuckbois", people that "treat her like shit", in short, a fatal attraction to people that are bad for her due to her own lack of value and self-worth. She jumps between several relationships frequently in an attempt to find her "perfect match", and never settles down for whoever she happens to be with at the time as a result of her commitment issues. She eventually moves past this flaw after dating Bryce Miller, but loses him in the process. Erin did suffer from a father complex, which leads her to collect a number of paternal figures, as well as fall for the advances of Arthur Hammond, but outgrew it shortly after Mask revealed that he was her actual father all along.

Erin was particularly proud of her Porsche 911 Turbo S, as it was one of the few things she had earned on her own. Unfortunately, it having been hit with the "nerf gun", as well as needing a vehicle that seats four for the Angels, she traded it to Trigger Freebird for his Mercedes AMG GT63. A few days later, the car would be lost to her when Slim used his Law of Surprise to take it from her. Upset that he wouldn't give it back to her after several weeks, Red gifted Erin a new one to replace it, which she would later regret trading as well.

Recently confirmed to be the biological daughter of Roman Sionis and that she has a brother, Richard Sionis.

Erin's bar license was revoked after racking up several felonies. She was first charged with reckless driving after launching her vehicle off a ramp above Ammunition mimicking Mel Rickenbacker. In her brief stay, she also developed an addiction to prison slushies. Erin then broke into Bolingbroke for more slushies in the prison cafeteria and because many of her friends were working in Corrections. She was charged with felony trespassing as a result.

Erin has since started an edible and food delivery business with Patrit “Mete” Metemahaan and helps promote and bartend for several newly opened bars.

She was engaged to Arthur Hammond, but she lost faith in the relationship, even before his disappearance, and planned on returning the ring he gave her. When Arthur returned to the city after a month-long absence, the two mutually decided to go their separate ways. She intended to sell the ring, however, Randy accidentally dropped it down the drain when she was showing it to him. She has a weird relationship with Bodean Tucker, and Bryce Miller.

Erin has been officially divorced by Alabaster Slim to keep the Vanilla Unicorn Strip Club out of her hands when she tried to sue him for sixty percent ownership. Using the 'Law of Surprise' to steal his title and claim "Countess" nobility status, Erin was supposed to remarry Alabaster within "a fortnight" under court order, however, Alabaster got engaged to Mary Mushkin instead. 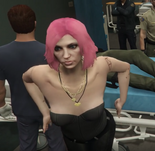 Dancing For Injured Ziggy At The Hospital

Dancing At The Club 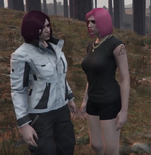 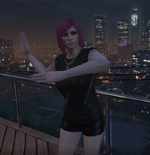 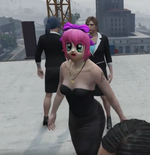 Sitting on the Edge (Crosses Arms)

Erin And Her Blood

Visiting Monster Daddy At The Hospital

Erin After Jumping Out Of A Moving Vehicle

Standing Above All (On A UFO)

Erin Takes Zelda For A Dip 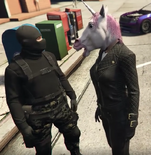 A Snake And A Horse

On The Phone At Hospital 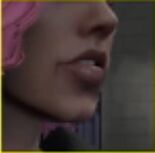 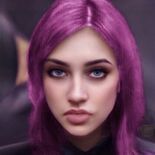 Slim attacking Erin in “A Peek Into NoPixel” trailer

Erin and Aaron after DOC dyed their hair in prison

Erin with Siz, Tessa and Vivi

Siz, Erin & Marcus in prison together