Emma Gaine is a character role-played by Jogiiee.

Emma Gaine is a yoga instructor, physical therapist, and doctor located in Los Santos. Emma formerly served two terms as the Mayor of Los Santos after being elected into office during the December 2021 Elections.

Emma Beatrice Gaine was born and raised in Vice city with her strict doctor parents. She lived a sheltered life that made her act out in her later years. She graduated from high school and went to college to become a doctor. During this time, she continued to dislike her work and decided to join a yoga studio finding her true passion. She decided to join a few peaceful protests and continued acting out against her parents. Finally, Emma decided it was time to change her life and move to Los Santos and try to find her passions and a new beginning to everything.

While in Los Santos, Emma started assisting the doctors at Pillbox by offering physical therapy to healing people inside Pillbox. After a few weeks of helping the doctors, Emma was hired by Pixie Plum to be the Physical Therapist for Pillbox.

Shortly after this, Emma continued her education and finished her medical degree. Emma moved and sold almost all of her belongings. Emma ended up putting her funds into buying a building and making her own physical therapy office, Sweet Relief Physical Therapy, and yoga office, Happy Yoga. Emma continued to bring more healthy lifestyle to the people of Los Santos.

Emma is currently an Resident at Pillbox Medical, on top of being a Physical Therapist.

During training to become a Doctor, Emma picked up a new nervous tick which involves puking. She is still trying to discover what all is making her do her nervous puking.

Emma also made an agreement with the casino about doing yoga classes on the roof. They set up an area where she can continue to help people with yoga and meditation; on top of that gave her full access to the hot tubs for physical therapy.

After her love of animals increased even more, Emma became a vet under "Little Paws" Vet Clinic who was ran by Balto Connelly. She takes care of animals and specializes in wildlife and farm animals. She wishes to eventually make sure everyone knows to take care of their animals as well as help fight against animal cruelty in the city.

After Abdul's impeachment, Emma took notice of the changes in the city. She felt like the city needed someone who would be supportive as well as a great listener. The city needed someone like a "mom". A person who will be there for them. In Dec. of 2021, Emma ran for Mayor of Los Santos. She won the election over Kevin Ram who came in second place. She hired two of her fellow running mates, Ricardo Perez and James Arsenal as her deputy mayors. She also hired Jessica Hilton, Ash Ketchup, and Erin Cox as deputy mayors because of they all spoke interest of the job. She won re-election as Mayor of Los Santos, and tried to help the city as much as she possibly can while also performing duties as a vet and doctor. She also prevailed in an impeachment trial against her.

At the conclusion of Emma's second term in March 2022, she helped her Deputy Mayor Sabith "Bunny" Cohen defeat Ramee El-Rahman in a contentious mayoral race marred by election violence. Emma was hired as the CEO of RON Oil, and installed an oil pump in the front yard of her house located at Mirror Park Blvd 7. On May 17, 2022, an oil pipe leak in Mirror Park caused oil slicks in the streets and contamination of the lake.

Emma has bright red hair that is usually in a pony tail when she is working or a braided flowy hairstyle when she is off duty. She wears many earthy tones and loves to wear comfortable clothes. She lives in yoga pants and is constantly wearing them. She wears glasses and always loses them. 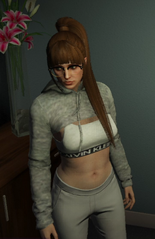