Elena Marilyn Vega is a character role-played by Syraphic.

Elena is a former con artist and informant from New York turned street criminal. She is known to be feisty, and always seems to be trying to "roast" others. Despite her outgoing and somewhat carefree exterior, she is quite serious when she needs to be. She was a co-leader of The Vixens, alongside with Olivia Harvey. She is currently a part of Gulag Gang as a member of Gulag Gang Academy.

It wasn’t everyday that a healthy, happy baby was dropped on the front door step of two petty criminals. Adelia ‘Lia’ Ryu was undeniably a not so pleasant surprise for Jonah and Marilyn Vega that Monday morning. They had contemplated their many options, but ultimately decided to keep the child that had been brought into their lives unexpectedly. With no real ability to give the child the life that she deserved, they simply decided to get through things day by day. Dismissing the birth name of the girl, they decided to choose one for her. That was when Adelia became Elena.

With her mother’s full time job as a pickpocketing bartender and her father’s occupation as a drug dealing bouncer, Elena never grew up with much. They used to live paycheck to paycheck, but with a child in the picture, the two tried to exhibit a little more responsibility. It didn’t always work out, Elena would know firsthand, but she always appreciated the effort. They never told her that she was adopted, but it didn’t take a detective to point out their distinctly different physical features. She never wanted to learn who her birth parents were. She loved the ones that she had been given. Blood be damned.

Despite her parents questionable upbringings, they always treated her with love and taught her to always try to be the best version of herself. Elena had always found it hypocritical yet amusing that her parents enforced a 9PM curfew and a ‘no boys allowed’ rule on her when they were slinging drugs on the corner of Park and East 33rd, but she never mentioned it. It made them happy thinking that she was going on the path of the straight and narrow.

Although she was determined to make a name for herself, she never quite wanted it to be in a conventional way. Growing up, she was never inclined to do well in school. She found it boring, and would often doze off in class. The only time she ever spoke up was to crack a joke or two, finding satisfaction in knowing others enjoyed her presence. She was relatively popular in high school, finding herself to be a commonly mentioned topic in the halls. She liked the attention, and often sought it out, trying crazy things and doing whatever she could to make sure that every head would be turned towards her when she entered a room. The feeling that she got when every eye was on her was indescribable.

Barely managing to graduate from high school, Elena found herself hopping from job to job. Knowing she had no real skill set on paper, she worked minimum wage for months. Of course, due to her social skills and desire to please the people, she always seemed to walk home with a few extra tips because she knew how to sweet talk. It was nice knowing that just her personality was enough to earn her a few extra bucks. On the side, she would do a bit of petty crime for some extra cash. Steal some makeup here, pickpocket there, coax a credit card out of a drunk businessman stumbling into a local bar. Anything to make ends meet.

It wasn’t long before Elena grew tired of tying aprons around her waist and serving tables. She decided to just stop showing up to all three of her jobs altogether. Her full time job now? Conning. She had found that flirting with drunk Wall Street men on Friday nights was an easy way to make money, and none of them could complain the next morning that they had spent $1000 on a pretty face when hammered.

Then, she moved up the criminal hierarchy. Once or twice, she assisted in a store or bank robbery. Playing a hostage or a distraction wasn’t hard, and it always earned her a fair share of the rewards. She liked this lifestyle: fast paced, action packed, and never a dull moment. It was exactly what she wanted, and it always seemed simple since people were so easy to read.

She began acting as an informant, playing innocent on the outside just to learn all the dirty, little secrets. No one would have ever expected her to be a gang ally, and that was what made her so good at what she did. She was a wolf in sheep’s clothing.

That was all kept under the covers though. A separate life from the one that she had with her friends and family. To them, she was the same girl that she had always been. A little wild, but holding a heart of gold. She was kind and caring, always dropping off little gifts and lending a helping hand. It wasn’t to say that this version of herself was fake, but it was something she could use to her advantage. Oftentimes, she found herself thinking, even around her friends, about how she could gain something from them. Information, resources, the upper hand. It was a twisted way of thinking, but that was just what it was like in that business. If you could even call it a business.

After months of trailing targets and gaining their trust, she had saved enough to warrant a desire to move. Of course, New York was always going to be her home, but she could never stay in one place too long. She never liked being bound to anything. So she packed her bags, said goodbye to her family, and set off for Los Santos in search of a new adventure. Under the guise of wanting to be an ‘actress’, she strived to climb up the criminal hierarchy of this new city and surpass all expectations of her.

She knew it would be difficult to build her way from the ground up. No connections, no allies, and certainly no friends. Los Santos was a completely different game, but Elena was determined to play. And to win.

On May 12, 2021, Elena released her debut single summer blues under Wu Chang Records. It became an instant hit and revitalized the R&B scene in the city. Being one of the few non-rappers in Wu Chang, Elena has set a high standard for herself with 'summer blues' garnering over 50k streams in its first week of release, certifying it Platinum. 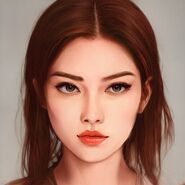 Elena but Cyperpunk by Akisznn 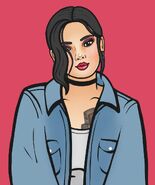